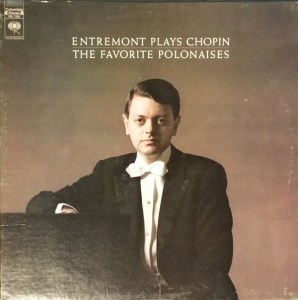 This vintage CBS Masterworks pressing has the kind of Tubey Magical Midrange that modern records rarely even BEGIN to reproduce. Folks, that sound is gone and it sure isn’t showing signs of coming back. If you love hearing INTO a recording, actually being able to “see” the artist, and feeling as if you are sitting in the concert hall with Mr. Entremont, this is the record for you. It’s what vintage all analog recordings are known for — this sound.

What the best sides of Chopin: The Favorite Polonaises have to offer is not hard to hear:

If you have full-range speakers, some of the qualities you may recognize in the sound of the piano are WEIGHT and WARMTH. The piano is not hard, brittle or tinkly. Instead the best copies show you a wonderfully full-bodied, warm, rich, smooth piano, one which sounds remarkably like the ones we’ve (hopefully) all heard countless times in concert.

In other words like a real piano, not a recorded one. This is what we look for in a good piano recording. Bad mastering can ruin the sound, and often does, along with worn out stampers and bad vinyl and five gram needles that scrape off the high frequencies. But a few copies survive all such hazards. They manage to reproduce the full spectrum of the piano’s wide range (and of course the wonderful performance of the pianist) on vintage vinyl, showing us the kind of sound we simply cannot find any other way.

What We’re Listening For on Entremont Plays Chopin