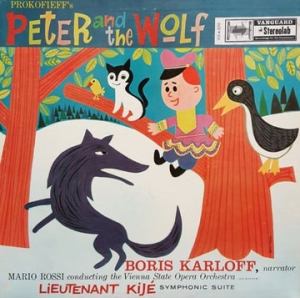 This performance of Peter and the Wolf from 1957 is our single favorite recording of the work. This copy is a DEMO DISC, suitable for permanently destroying the rationale for every audiophile record ever made, simply on the grounds that none of them sound remotely as good as this one does.

The immediacy and unerringly realistic presentation of the solo instruments — bassoon, oboe, flute, etc. (each of which serves to represent a character in the story) — are so lifelike that I defy anyone to name a recording to challenge our assertion that this is positively As Good As It Gets.

What We’re Listening For On Peter and the Wolf

In addition to the unerringly correct timbre of every instrument in the soundfield, the overall presentation is exceptionally spacious, open and three-dimensional, with an unusually extended top (the lack of which often badly hurts vintage pressings). The bottom goes very deep as well; watch for it when the bass drum comes into play. (Prokofiev sure loved his bass drums —- sometimes there are three —- and god bless him for it!)

The narrator for this piece practically always sounds like he has been recorded in a sound booth, of varying quality to be sure. (Bernstein’s narration is one of the worst in this respect, sounding more like Aqualung than Lennie.)

Somehow Boris Karloff sounds like he is on stage with the orchestra here. He has either been recorded on stage, or precisely the right amount and precisely the right kind of reverb has been added to his voice to match perfectly the sound of the hall.

When you hear the bassoon or clarinet or oboe playing their solo parts on this record, you should be knocked out by how real those instruments sound. Man, this is analog at its best. You will have an impossible time finding this piece of music recorded, mastered and pressed with better sound than on this very side one.

Your Guard Against Phony Hi-Fi Sound

Peter and the Wolf

Prokofiev’s Peter and the Wolf, for narrator and orchestra, was a commission from the Central Children’s Theatre in 1936. The composer himself wrote the text, which tells the story of a young boy who manages to capture a vicious wolf. The piece is remarkable for many reasons, but perhaps most notably for its didactic scoring, designed by Prokofiev to introduce children to the sounds of orchestral instruments.The instrumentation is also important for the narration, since each character in the story is represented by a different instrument: the bird by a flute, the duck by an oboe, the grandfather by a bassoon, the cat by a clarinet, the wolf by three horns, and Peter by the strings. The entire work was composed in a single week (in piano score), and the orchestration was completed less than two weeks later.

Prokofiev’s writing is intentionally direct and transparent, reflecting his desire to make the work enjoyable for children. His musical characterizations are broad and straightforward, from the delicate birdsong of the flute, to the thunderous kettledrums portraying the hunters’ rifle shots.

The work is in three sections, loosely following a kind of sonata form. The opening section introduces the main characters, preparing the audience for the action to come. The middle section–the “development”–contains the most exciting action, beginning with the appearance of the wolf, his eating of the duck, and his eventual capture by young Peter. The final scene acts as a recapitulation, as the principal characters return for a final parade; here, Peter’s opening theme returns transformed into a triumphant march.

Like most of Prokofiev’s music, Peter and the Wolf features adroit thematic integration and development. Peter’s theme, the dominant theme of the work, is stated at the beginning of the piece, and is then combined with other subordinate themes. This thematic blending is also closely tied to the dramatic action, underscoring developments in the story.

Harmonically, the piece begins and ends in C major, but contains many sudden harmonic shifts, another important aspect of Prokofiev’s style. Formally, though the piece does follow a loose sonata structure, it is by no means a case of textbook form; themes develop freely, harmonic direction is dictated largely by the action, and characterization assumes priority over any kind of academic musical construction.

Peter and the Wolf has long been a classic, loved by children for its vivid storytelling, and by adults for its gentle sense of humor and good-natured tunefulness. It was composed 22 years after a similar piece, The Ugly Duckling of 1914-1915, which also features humorous musical sketches of animals. It also bears comparison with Benjamin Britten’s Young Person’s Guide to the Orchestra, which also seeks to acquaint children with the sounds of the symphony.

Wikipedia on Peter and the Wolf

Peter and the Wolf is a composition written by Sergei Prokofiev in 1936 in the USSR. It is a children’s story (with both music and text by Prokofiev), spoken by a narrator accompanied by the orchestra.

Each character in the story has a particular instrument and a musical theme:

Peter, a Young Pioneer, lives at his grandfather’s home in a forest clearing. One day, Peter goes out into the clearing, leaving the garden gate open, and the duck that lives in the yard takes the opportunity to go swimming in a pond nearby. The duck starts arguing with a little bird (“What kind of bird are you if you can’t fly?” – “What kind of bird are you if you can’t swim?”). Peter’s pet cat stalks them quietly, and the bird—warned by Peter—flies to safety in a tall tree while the duck swims to safety in the middle of the pond.Peter’s grandfather scolds Peter for being outside in the meadow alone (“Suppose a wolf came out of the forest?”), and, when Peter defies him, saying that “Boys like me are not afraid of wolves”, his grandfather takes him back into the house and locks the gate. Soon afterwards “a big, grey wolf” does indeed come out of the forest. The cat quickly climbs into a tree, but the duck, who has excitedly jumped out of the pond, is chased, overtaken and swallowed by the wolf.

Peter fetches a rope and climbs over the garden wall into the tree. He asks the bird to fly around the wolf’s head to distract it, while he lowers a noose and catches the wolf by its tail. The wolf struggles to get free, but Peter ties the rope to the tree and the noose only gets tighter.

Some hunters, who have been tracking the wolf, come out of the forest ready to shoot, but Peter gets them to help him take the wolf to a zoo in a victory parade (the piece was first performed for an audience of Young Pioneers during May Day celebrations) that includes himself, the bird, the hunters leading the wolf, the cat and grumpy grumbling Grandfather (“What if Peter hadn’t caught the wolf? What then?”)

In the story’s ending, the listener is told that “if you listen very carefully, you’d hear the duck quacking inside the wolf’s belly, because the wolf in his hurry had swallowed her alive.”