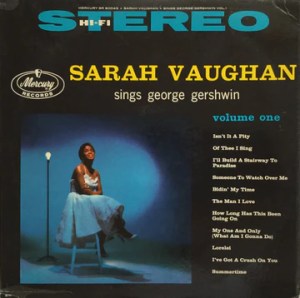 This vintage Black Label Mercury stereo LP has the kind of Tubey Magical Midrange that modern pressings barely BEGIN to reproduce. Folks, that sound is gone and it sure isn’t showing any sign of coming back.

Having done this for so long, we understand and appreciate that rich, full, solid, Tubey Magical sound is key to the presentation of this primarily vocal music. We rate these qualities higher than others we might be listening for (e.g., bass definition, soundstage, depth, etc.). The music is not so much about the details in the recording, but rather in trying to recreate a solid, palpable, real Sarah Vaughan singing live in your listening room. The best copies have an uncanny way of doing just that.

Sarah in Her Prime

We’ve been fortunate to have a number of excellent sounding Sarah Vaughan records find their way onto our turntable over the course of the last few years, but not all that many of them have made it to the site.

Most of the reason for this sorry state of affairs can be attributed to the paucity of clean copies of her prime albums for Mercury (Emarcy being Mercury’s jazz subsidiary) in local record stores. Most of the time her best albums are either missing or scratched. Plenty of Pablos and Mainstreams, sure, but we have never been all that impressed with either label’s recordings of female vocalists.

Finding 63 year old pressings in audiophile playing condition is not easy, but if you hit the records shops in Los Angeles often enough, a copy or two per year is bound to come your way, and eventually there will be enough LPs to do a shootout. Case in point: This very pressing is the result of years of digging through the bins. And when the sound and music are this good, we feel that the time and money that went into finding such a wonderful record were well spent indeed.

What outstanding sides on Sarah Vaughan Sings George Gershwin have to offer is not hard to hear:

For our recent shootout, we had at our disposal a number of pressings with the potential for Hot Stamper sound. (All stereo; the mono pressings were a joke.)

We cleaned them carefully, then unplugged everything in the house we could, warmed up the system, Talisman’d it, found the right VTA for our Triplanar arm (by ear of course) and proceeded to spend the next hour or so playing copy after copy on side one, after which we repeated the process for side two.

With the exception of three songs recorded earlier, this set dates from 1957 and finds the great Sarah Vaughan accompanied by her regular pianist Jimmy Jones plus a studio orchestra arranged by Hal Mooney. Since these 15 selections are fairly concise (two to five minutes apiece), the emphasis is on the melody and the original lyrics without all that much improvising taking place. Vaughan, who had a wondrous voice, is in excellent form on the superior material.