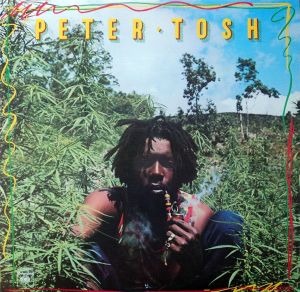 This vintage Columbia Red Label pressing has the kind of Tubey Magical Midrange that modern records rarely even BEGIN to reproduce. Folks, that sound is gone and it sure isn’t showing signs of coming back. If you love hearing INTO a recording, actually being able to “see” the performers, and feeling as if you are sitting in the studio with the Tosh, this is the record for you. It’s what vintage all analog recordings are known for — this sound.

What the best sides of Legalize It have to offer is not hard to hear:

What We Listen For on Legalize It

After years of being overshadowed by Bob Marley, Peter Tosh left the Wailers to pursue a solo career. Released in 1976, Legalize It is a bold statement that Peter Tosh had arrived and was a creative force in his own right. Although he explores some issues of spirituality, this is Tosh’s most lightweight album in the sense that it is his least political. This is not meant as a criticism — in fact, Tosh’s playfulness and joy only add to the album’s charm.

He does make political statements (the title track celebrates and promotes the use of marijuana), but they are done with a sense of humor and a melodic infectiousness that belie his sincere concern for the issues. Tosh incorporates many instruments and mixes slower ballads with upbeat grooving tunes.

Legalize It cemented Tosh’s position as a giant in reggae, and the album is one of the best albums of the genre.