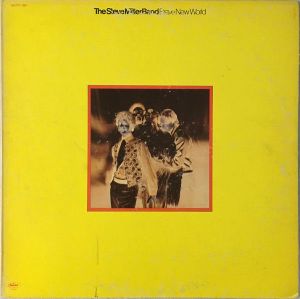 We just finished a big shootout for this fun Glyn Johns-engineered album, and one thing we can tell you without fear of contradiction is that the average copy of this album simply won’t cut it for serious audiophile listening. This copy had some of the best sound we heard, with the kind of open, extended top end and big, solid bottom that really lets this music come to life!

If you’re not familiar with this album, it is certainly not the Steve Miller Band sound that you’d expect after hearing “Fly Like An Eagle” and “The Joker” a million times on classic rock radio. This is the grungier psych-blues side of the band; one that most of us have probably long forgotten by now.

All Music Guide gives the album 4 1/2 stars, and we enjoyed it as well, so its sonic and musical credentials are certainly in order.

What We’re Listening For On Brave New World

Steve Miller’s guitar playing is the star of this album, blazing across the whole affair more prominently than on any other release in his lengthy career; many of the songs have a power trio feel. In addition to the fine guitar work, Miller’s vocals are stronger here, and during this era in general, than they would be in his hitmaking days in the mid-’70s, when he was much more laid-back and overdubbed. Ever the borrower, adapter, and integrator, Steve Miller shapes the blues, psychedelia, sound effects, sweet multi-tracked vocal harmonies, and guitar-driven hard rock into one cohesive musical statement with this release.