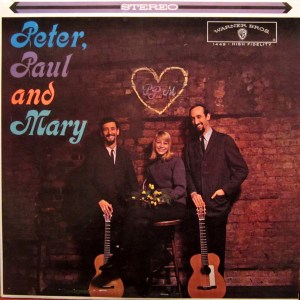 What the Best Sides of Peter, Paul and Mary Have to Offer Is Not Hard to Hear

What We’re Listening For on Peter, Paul and Mary

The debut album by Peter, Paul & Mary is still one of the best albums to come out of the 1960s folk music revival. It’s a beautifully harmonized collection of the best songs that the group knew, stirring in its sensibilities and its haunting melodies as it crosses between folk, children’s songs, and even gospel (“If I Had My Way”).

Light-hearted fare (“Lemon Tree,” which became their first hit single) co-existed with more earnest material, particularly “If I Had a Hammer.” Ironically, the trio’s version of the latter song, which Pete Seeger and Lee Hayes had written in the early days of the Weavers’ history, helped push popular folk music in a more political direction at the time, but it was another song in their repertory, Seeger’s “Where Have All the Flowers Gone,” that also indirectly helped jump start that movement. The group had performed it in Boston at a concert attended by the Kingston Trio, who immediately returned to New York and cut their own version, which charted as a single early in 1962. Other highlights include “It’s Raining” and “500 Miles.”

Peter, Paul & Mary, which hit the top spot on the album charts as part of a 185-week run, is the purest of the trio’s albums, laced with innocent good spirits and an optimism that remains infectious.