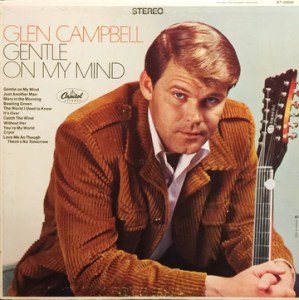 What We’re Listening For on Gentle On My Mind

The best of Campbell’s early albums, and also his first real commercial success. Ironically, the title track (written by John Hartford) which started Campbell on the road to stardom, was never intended for release — he had submitted it as a demo, and Capitol issued it, to everybody’s profit. Campbell’s cover of “Catch the Wind” is one of the finest covers of a Donovan song ever done, stripping away any hint of the composer’s sub-Dylan pretensions and bringing out the song’s genuine beauty — it’s folk-pop, in the same manner that Peter, Paul and Mary’s cover of Dylan’s “Blowin’ in the Wind” was, but excellent folk-pop.

This is Campbell’s folksiest album, albeit with string orchestra accompaniment, as he covers “Bowling Green,” “Mary in the Morning,” and the title tune, and you get to hear him do a solo guitar and voice number, his own “Just Another Man.” Even the most overproduced stuff here, “You’re My World” and Rod McKuen’s “The World I Used to Know,” come off well, and Campbell is in excellent voice throughout, most especially on a wonderfully restrained and beautiful rendition of Roy Orbison’s “Crying.”