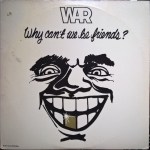 More of the Music of War

Below we discuss two qualities essential to the sound of War’s Masterpiece of Jazzy Soul, Why Can’t We Be Friends?

As usually happens in these shootouts we learned that there’s so much more to this album than just big bass. What really makes this music come alive on the best copies was the result of two qualities we found were in fairly short supply: Richness and Transparency.

When the vocals sound thin and pinched as they do on so many copies of this album, possibly the result of the grainy crap vinyl UA is infamous for, that sour sound takes all the fun out of the music. Many tracks have group vocals and choruses, and the best copies make all the guys sound like they are standing in a big room, shoulder to shoulder, belting it out live and in living color.

These are not classically trained singers. These are guys who love their music, who make up in enthusiasm what they lack in polish. I say more power to them. Smoke ’em if you got ’em and turn it up!

The good copies capture that energy and bring it into the mix with the full-bodied sound it no doubt had live in the studio. When the EQ or the vinyl goes awry and their voices start to take on a lean or gritty quality, the party’s over.

Seriously; this album has a party atmosphere; it’s overflowing with fun energy. If you can’t play it loud enough to rock because the sound is fighting you with every click of the volume knob, what is the point of playing it all?

Transparency and the Feeling of Reality

That’s one thing we learned from our shootout. The other was the importance of TRANSPARENCY. Of course this has to be a multi-miked, multi-tracked, overdubbed pop record — they don’t make them any other way — but it doesn’t have to FEEL like one.

When you get a good copy it feels like all these guys are live in the studio. They may have their own mics, and are certainly being placed artificially in the soundfield to suit the needs of the track (kick drum here, timbales over there), but the transparency of the killer pressings makes them sound like they are all in the same room playing together. You hear their grunts and laughter way back in the mix, just as if you were at one of their concerts. (Which, considering all the drums and percussion, must have been an absolute blast!)

Don’t Let No One Get You Down

This track has a fairly quiet intro, just guitar and bass, which is not exactly an ideal match with the UA vinyl that these original LPs are pressed on. There will always be some surface noise at the start, but once the rest of the band comes in, there’s so much going on that the surfaces are no longer much of a problem.

Smile Happy
So
Low Rider
In Mazatlan
Why Can’t We Be Friends?

(By the way, we agree with practically every word of praise here. This guy is a fan and so are we!)

Cut from the same cloth as the band’s 1973 Deliver the Word LP, War’s 1975 Why Can’t We Be Friends? is a masterpiece in its scope and breadth. And, emerging as the last work the band would do for its longtime label, United Artists, it became a fitting swansong, powering up the charts and giving War its fourth and final number one hit. In recent years, the album has been overshadowed by the monstrously popular bass-beating and bright brass of its singular hit, “Low Rider.”

Indeed, the song would become the band’s signature theme, as the Latino street-cruiser jam quickly became a live set staple and, much later, was reinvigorated through sampling on songs by the Beastie Boys, Stereo MC’s, and Offspring. However, that one track, iconographic as it is, is by no means the only treat onboard Why Can’t We Be Friends? There are far more interesting and superb treats roiling in the wake of “Low Rider.” The snappy title track, which poses the question of the decade and, oddly, closes the album, is a feel-good thumper. Its bright brass punctuation and rakish vocals are wonderfully combined with an absolutely contagious reggae beat.

Then, add the doesn’t-get-much-better-than-that medley “Leroy’s Latin Lament.” Divided into four “songs,” the music swings from the smart vocal opening “Lonnie Dreams” to the effervescent Latin jam of “La Fiesta.” And, of course, where there’s War, there’s funk — this time on the seven-plus minute”Heartbeat.” Wrap it all up with the poignant ballad “Lotus Blossom,” and the result is pretty much perfection. Why Can’t We Be Friends? remains one of War’s truly outstanding efforts, and has become an integral part of the funk genre’s landscape. It also remains the nightcap of their finest hour. War’s ill-timed move to MCA changed the energy and focus of the band forever.