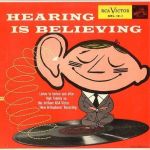 F. A. Hayek summarized his view succinctly when he noted that “The curious task of economics is to demonstrate to men how little they really know about what they imagine they can design.”

Our curious task has been to demonstrate to audiophiles and the reviewers who write for them how mistaken they are to believe that they can understand the sound of a recording by playing a single pressing of it.

Similarly, the modern mastering engineer operates under the pretense that he can design and operate a cutting system that produces consistently superior sounding records to those made in the past. Based on the hundreds of the modern records we have played, this is clearly  a case of over-promising and under-delivering.

These assumptions, and the half-baked knowledge that flows from them, are clearly mistaken. The scores of commentaries we have written on both subjects provide all the evidence one could possibly need to falsify them, and, with some effort, can be found among the 5000 postings on this blog.

The Hot Stamper pressings we sell, so much bigger, livelier, and more engaging than anything produced by these so-called audiophile mastering houses, are simply the physical evidence of our deeper and more correct understanding of records and their manifestly mysterious properties.

END_OF_DOCUMENT_TOKEN_TO_BE_REPLACED

Click on the picture to make it easier to read.

END_OF_DOCUMENT_TOKEN_TO_BE_REPLACED

One of our good customers wrote this email to me recently:

I had a record collection for all my life until about ten years ago, at which point I asked myself what was it for? I get to hear all the best records every day!

I sit my wife down from time to time and play her Deja Vu or Back in Black or The Wall or some other amazing pressing we’ve just listened to — Aqualung would have worked too — and I always tell her, this record may be gone next week so this is it, listen to it now or forever hold your peace.

Most audiophiles never have that experience but it’s really the only way I listen to music anymore, on the best pressings in the world.

I play lots of classical music these days, really a thrill to hear on a big, heavily-tweaked, high-resolution system. The recreation of the concert hall space and ambience can sometimes be jaw-dropping. We had to stop going to the Santa Barbara symphony because the sound was so much better in my listening room. I can’t compete with Disney Hall, but it takes two hours to get there and good tickets are $300-500 each, tough to make the commitment at those prices.

I’ve had an extensive record collection for all of my life, right up until about fifteen years ago. Starting at the tender young age of 10, I bought the 45 of She Loves You on Swan records, which I still own. Can’t play it, it’s broken, but I keep it anyway. When I was a kid, I used to take my two dollar weekly allowance and buy two 45s with it. Did that for years. Still have them, close to two hundred in old carrying cases. I look forward to playing them in my retirement.

I had hundreds of amazing sounding LPs in my collection, the best of the best from more than 20 years of doing shootouts. About fifteen years ago I asked myself what were all these great sounding records sitting on a shelf for? I never played them because I got to hear all my favorite records every day, and after playing records all day, the last thing I wanted to do at night or on a weekend was pull a record off the shelf and play it.

I sit my wife down from time to time when the stereo is at its peak playback quality after doing shootouts all day. I might put on Deja Vu or Back in Black or The Wall or some other amazing pressing we’ve just found, and I always point out to her that this is a record that will be gone next week. This is it, listen to it now because you will not have the chance again for many months, sometimes even years.

Most audiophiles outside of our customers rarely have that experience, but it’s really the only way I listen to music anymore, on the best pressings in the world.

I play mostly classical records these days, which, on the best vintage pressings are really a thrill on big speakers at loud volumes. We had to stop going to the Santa Barbara symphony because the sound was better in my listening room than it was in that hall. Practically all of the performances on vinyl were better too, to tell you the truth. I can’t compete with Disney Hall for sonics, but it takes two hours to get there and good tickets are $300-500 each. It’s tough to make the commitment at those prices, especially when you have spent your entire adult life building a great stereo and room. Suspension of disbelief is immediate and lasting.

The best classical recordings cannot compete with a good orchestra in a good hall, but it has been my experience that those two things in combination are very hard to find in the real world. Fortunately for me, the memory of the music and sound I used to hear at the Disney Hall faded after a few weeks though, at which point I could go back to playing my classical records and enjoying the hell out of them.

END_OF_DOCUMENT_TOKEN_TO_BE_REPLACED

I’ve observed an interesting development in the world of record collecting, one that seems to be true for both myself and many of my customers.

As I’ve gotten older I find I have more money, which allows me to buy higher quality goods of all kinds, especially records. At the same time I seem to have much less tolerance for mediocrity, as well as less patience with the hassle of having to do  too much work to find a record that’s truly exceptional, one that actually will reward the time and effort it takes to sit down and listen to it all the way through.

As a consequence, if I’m going to play a record, I’m going to make sure it’s a good one, and I don’t want to have to play five or ten copies to find the one with the magic.

We actually do play five or ten copies of every record  because it’s our business, but I sure don’t have the patience to go through all that for my own personal listening the way I used to twenty years ago. Of course, that’s precisely what taught me what I know about records today, and how I learned to find the one with the magic, but it sure would be hard to start all over again at this age (I’m 66). END_OF_DOCUMENT_TOKEN_TO_BE_REPLACED