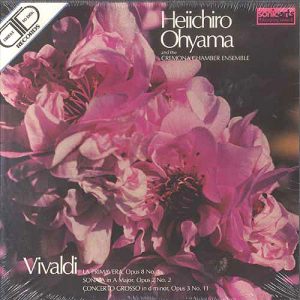 This is a SUPERB sounding Sonic Arts Direct-to-Disc LP with Super Hot Stamper sound on both sides. I gave this one rave reviews twenty years ago (when we could still find them) and I’m happy to see that the sound has held up just fine in the intervening decades. Recorded in a dry acoustic, immediacy and clarity are the sonic strengths of this side one. This is one of the most natural Direct-Disc I’ve heard in a long time. One could easily use it as Demo Disc, depending on your taste and system.

There is wonderful chamber music throughout this LP. It comes as no surprise that it was nominated for two Grammys.

A++, with a very slight edge to the top of the strings being all that holds it back from a Triple Plus grade. The sound is accurate and real for the room that it was recorded in.

A++, this side I liked a bit better, it’s a bit smoother and more relaxed; it sounds as though the mics are not quite as close to the performers on this side. END_OF_DOCUMENT_TOKEN_TO_BE_REPLACED

“… several outstanding performances by Taj and his International Rhythm Band. Indeed, ‘Little Brown Dog’ catches Taj in one of his transcendental live moments when he gets so down in the groove you never want him to stop.” – AMG Review

Philips is one of the better direct disc labels from back in the day (although that isn’t saying much because most of them were mediocre at best). It was garnering rave reviews from TAS a couple of decades ago. Does anybody remember? Probably not, but I do. I flipped out when I saw this record in my local shop. They charged top dollar but I paid it, knowing what a rare and special record it is. END_OF_DOCUMENT_TOKEN_TO_BE_REPLACED

Thankfully that is no longer the case, although we do have a handful of direct discs that we still shootout, such as The Three, Glenn Miller, Straight from the Heart and the odd Sheffield. END_OF_DOCUMENT_TOKEN_TO_BE_REPLACED

This is a SUPER RARE IMMACULATE RCA Japanese Import Direct-to-Disc LP with Virtually No Sign Of Play (VNSOP). If you’re a fan of clarinet-led swing jazz, you’ll have a hard time finding a better record than this. The music is absolutely wonderful. Not only that, but it has DEMO DISC sound as well.

Direct-to-Disc Recording recorded live at Iruma City Auditorium, Saitama, Japan on April 21, 1978. Eiji Kitamura and His Allstars include Eiji on clarinet, Ichiro Masuda on vibraphone, Yoshitaka Akimitsu on piano, Yukio Ikezawa on bass, Hiroshi Sunaga on drums and Judy Anton provides vocals on “What a Little Moonlight Can Do.”

This album was recorded by the Direct-to-Disc recording method, to capture the natural reverberation of 1,200 seat concert hall. Various kinds of recording equipment were brought in parts to the backstage of the hall for the recording then reassembled and adjusted. Two whole days were spent adjusting all the equipment. END_OF_DOCUMENT_TOKEN_TO_BE_REPLACED

Please note: we award the Four Plus A++++ grade so rarely that we don’t have a graphic for it in our system to use in the grading scale shown above. So the side two here shows up on the chart as A+++, but when you hear this copy you will know why we gave it a fourth plus!

Trumpets, trombones, tubas, tamborines, big bass, drums — everything has the true tonality and the vibrancy of the real thing. The reason this record was such a big hit in its day because the recording engineers were able to capture that sound better than anybody else around. That’s also the reason this is a Must Own record today — the sound holds up!

Just listen to that amazing brass choir on Oh Lord, I’m On My Way. It just doesn’t get any better than that. If ever there was a Demo Disc, this is one! END_OF_DOCUMENT_TOKEN_TO_BE_REPLACED

END_OF_DOCUMENT_TOKEN_TO_BE_REPLACED

This is a Century Direct-to-Disc LP that is every bit as good sounding as the excellent Glenn Miller disc, and in some ways better.

The problem is that Benny sounds much too old and tired, so this one gets a Not Recommended ranking from us.

On the best pressings, the horns are so lively and high-rez, not to mention full-bodied, this could easily become a favorite big band album to demo or test with — or just to enjoy the hell out of.

Unlike most Direct to Disc recordings, this album actually contains real music worth listening to — but only when the pressing lets the energy of the musicians through, with actual fidelity to the sounds of the real instruments. Brass without bite is boring. Drummers who are too delicate in their drumming will put you to sleep. END_OF_DOCUMENT_TOKEN_TO_BE_REPLACED

This Century Direct-to-Disc LP is a real sleeper. The arrangements are lively, the material is excellent and the sound is equal to the task. One of the better Century DDs.