This is a WONDERFUL sounding violin concerto recording. It has TUBEY MAGIC as well as MUSIC to die for. What”s most interesting about the sound is how well the violin is integrated into the orchestra. On most RCAs, just to pick one golden age label to use as an example, the violin is typically hugely oversized and placed far in front of the orchestra. Not so here. The violin is of a whole with the orchestra, which makes for a much more natural and relaxed presentation. END_OF_DOCUMENT_TOKEN_TO_BE_REPLACED

WONDERFUL MUSIC AND SOUND ON SIDE ONE, plus quiet vinyl! This copy gives you precisely the right balance of clarity and sweetness we were looking for in the sound of the violin. Beyond that, the orchestra also sounds amazing here — so RICH and FULL-BODIED. We found the sound of this side one Hard To Fault and I bet you will too. In fact, I guarantee it — or your money back! This record puts most of the TAS Super Discs to shame, and it’s on a budget reissue label. Hey Harry, how about them apples!?

Side two is decent but a bit too dark. The best music is on side one, so it’s not a huge loss. It’ll also show you just how exceptional this side one is! END_OF_DOCUMENT_TOKEN_TO_BE_REPLACED

Side two here earned a seriously good sonic grade of A++ for the two shorter works by Franck and Litolff respectively. The top end is extended and the overall sound is quite clear and natural.

Side one is not quite up to the sound heard on side two. We rate it A+. It’s a bit dark and there is some smear on the piano. However, this is a wonderfully well-recorded album, so even at one plus the sound is still quite respectable. END_OF_DOCUMENT_TOKEN_TO_BE_REPLACED

This is a rare and very nice looking Capitol LP with Very Little Sign of Play (VLSOP). The violin sounds rich and sweet, although the orchestral sound is a bit old school. END_OF_DOCUMENT_TOKEN_TO_BE_REPLACED

This London White Hot Stamper pressing has DEMO QUALITY SOUND on side two! Sound of this calibre is nothing less than SHOCKING. If you like the sound of solo violin — and who doesn’t — you will have a VERY hard time finding a better sounding recording of it than this. That’s assuming you can get your Vertical Tracking Angle (VTA) dead on the money, not something every audiophile can manage. If you can, lookout — you are in for a sonic treat.

And when one side of a record sounds this good, what are the chances that the other side will also be as good? Slim is the flip answer, but flip or not, it’s no less true. Although quite good in many respects, side one is clearly a step down. The statistical law of “regression toward the mean” would tell us it almost had to be. Side two is simply an outlier in the world of violin records. I would not expect to hear many that sound as good in my lifetime, or at least in my audio lifetime. END_OF_DOCUMENT_TOKEN_TO_BE_REPLACED

This is one of the MOST AMAZING VIOLIN RECORDINGS in the history of the world. For sheer violin virtuosity it doesn’t get any better than this. Ricci and London in the early ’50s cannot be beat! This is a true Demo Disc with music of the highest caliber, and I’m betting whoever takes this one home will be THRILLED.

Both sides are dynamic, full-bodied, lively and sweet. This is a vintage London mono recording of the ’50s and consequently has some limitations in terms of bandwidth and of course soundstage, but the luscious midrange more than makes up for both. The violin is REAL in a way that few other recordings manage to make it.

Since this is a particularly thick piece of vinyl, you’ll get the best sound from this one by adjusting your VTA a bit as if it were a modern Heavy Vinyl release. Of course, I don’t think there’s any modern Heavy Vinyl out there that could hold a candle to a record like this! And when the VTA locks in perfectly on this record you will know it — the tonality is Right On The Money. END_OF_DOCUMENT_TOKEN_TO_BE_REPLACED

Another remarkable Demo Disc from the Golden Age of recording, in this case 1961, with the benefit of more modern mastering from the ’70s, a combination that works wonders on this title, as you will hear from both of these White Hot sides.

The sound is so transparent, undistorted, three-dimensional and REAL, without any sacrifice in solidity, richness or Tubey Magic, that we knew we had our shootout winner with this copy.

It simply could not be beat: no other copy excelled in so many areas of reproduction whilst striking the ideal balance between soloist and orchestra. END_OF_DOCUMENT_TOKEN_TO_BE_REPLACED

A Hall of Shame Pressing and another Heavy Vinyl Classical LP debunked.

We managed to get hold of the Heavy Vinyl pressing put out by Fenn Music in Germany, about which a well known record dealer on the web (you may recognize the style) had this to say:

Stunning Reissue Of EMI ASD 440 Recorded In Stereo In 1961. This Recording Featuring The Royal Philharmonic Conducted By Alberto Erede Provides Convincing Proof, If Any Were Needed, That Menuhin Was One Of The Great Violinists Of The 20th Century.

The “convincing proof” provided by this record is that those responsible for it are Rank Incompetents of the Worst Kind (see what I did there?). Screechy, bright, shrill, thin and harsh, it’s hard to imagine worse sound to be subjected to from this piece of Heavy Vinyl trash.

NO warmth. NO sweetness. NO richness. NO Tubey Magic. In other words, NO trace of the original’s (or the early reissue’s) analog sound. I may own at most one or two classical CDs that sound this bad, and I own quite a few. I have to wonder how records this awful get released. Then again, the Heavy Vinyl Buyer of today is not known for his discrimination; if he were Sundazed and Analogue Productions would have gone out of business many years ago. END_OF_DOCUMENT_TOKEN_TO_BE_REPLACED 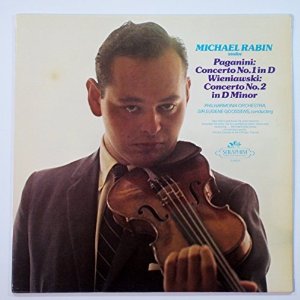 Another in our series of Home Audio Exercises with specific advice on What to Listen For (WTLF) as you critically adjust your VTA.

Experimenting with the VTA for this record we found a precise point where it all came together, far beyond whatever expectations we might have had at the time, which revealed a violin floating between the speakers, an effect that as audiophiles we appreciate for the magic trick that it is.

The sound of the wood of the instrument became so clear, the harmonic textures so natural, it was quite a shock to hear a good record somehow become an amazing one. All it took was a few moments of experimentation.

With the right VTA setting we immediately heard more harmonic detail, with no sacrifice in richness. That’s the clearest sign that your setup is right, or very close to it.
END_OF_DOCUMENT_TOKEN_TO_BE_REPLACED