Lifeless, compressed and thin. It’s clean and transparent, I’ll give it that, which is no doubt why so many audiophiles have been fooled into thinking it actually sounds better than the original. But of course there is no original; there are thousands of them, and they all sound different.

The Hot Stamper commentary below is for a pair of records that proves our case in the clearest possible way. END_OF_DOCUMENT_TOKEN_TO_BE_REPLACED

This pressing boasts relatively rich, sweet strings, especially for a Deutsche Grammophon LP. Both sides really get quiet in places, a sure sign that all the dynamics of the master tape were protected in the mastering of this copy (and the reason it is so hard to find a copy that plays better than Mint Minus Minus. We do have a quieter copy with lower grades if you are interested though.) END_OF_DOCUMENT_TOKEN_TO_BE_REPLACED

This Factory Sealed Bose / Mercury Demonstration LP is autographed by none other than Amar G. Bose. The autograph reads “To EMI, with regards and best wishes, Amar G. Bose.”

Bose may not have ever made very good speakers, but they sure knew good recordings when they heard them. This LP has excerpts from some of the top Mercury titles, including music by Copland (El Salon Mexico), Kodaly (Hary Janos Suite), Mussorgsky/ Ravel (Pictures At An Exhibition), and Rimsky-Korsakov (Russian Easter Overture).I played one of these Bose records years ago and was surprised at how good it sounded. The transfers of the Mercury tapes were excellent! I guess that makes sense — if you want to show off your speakers you better use a well-mastered record for the demonstration.

I was duped into buying my first real audiophile speaker, Infinity Monitors, when the clever salesman played Sheffield’s S9 through them. I bought them on the spot. It was only later when I got home that none of my other records sounded as good, or even good for that matter. That was my first exposure to a Direct to Disc recording. To this day I can still picture the room the Infinity’s were playing in; it really was a watershed moment in my audiophile life.

This was the mid-’70s, 40+ years ago, and I am proud to say I have never owned a “small” speaker since. I’ve heard a lot of them — some good, most of them not so good — but that’s a sound I personally could never live with. Especially if you are trying to play large orchestral works like those found on this LP. Small speakers just can’t move enough air to bring this music to life in any way that gives meaning to the term Hi-Fidelity. END_OF_DOCUMENT_TOKEN_TO_BE_REPLACED

Better than Super Hot Stamper sound on side one of this lovely Victrola reissue from 1960, one of the best in the entire series. Pay attention to the brass — yes, it may have some tubey smear, but listen to how HUGE and POWERFUL it is! Drop the needle on the first side and watch (or listen) as the sound comes jumping out of your speakers. Modern records can’t do that.

These Decca-derived recordings are highly sought after, and with good reason. It’s hard to imagine a more wonderful audiophile disc, both in terms of the programme and the quality of the sound. 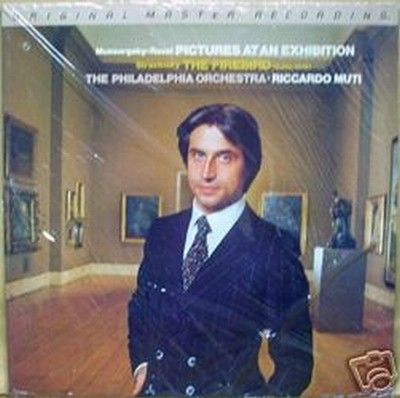 The MoFi mastering here is a joke. All that phony boosted top end makes the strings sound funny and causes mischief in virtually every other part of the orchestra as well. Not surprisingly, those boosted highs are missing from the real EMIs.

Never liked the performance. The sound can be quite good however.

Somewhat slow and ponderous – there are better performances with excellent sound.

These are just some of the recordings of the music of Mussorgsky that we’ve auditioned and found wanting. Without going into specifics we’ll just say these albums suffer from poor performances, poor sound, or both, and therefore do not deserve a place on our site, in your collection, and may even belong in a Hall of Shame.

This is the kind of record that the mono cartridge owners of the world worship. And for good reason. But you don’t need to have a mono cartridge to hear how good — in fact, how much BETTER — this copy sounds than most of the stereo pressings out there.

I found out about mono classical records one day when I got a mono copy of The Power Of The Orchestra, VCS 2659. It sounded better than any stereo recording of that work I had ever heard. All the instruments were so much more solid sounding, so palpable, so free from distortion, that it made me recognize for the first time what the mono record lovers of the world were talking about. END_OF_DOCUMENT_TOKEN_TO_BE_REPLACED

This Shaded Dog pressing of the famous TAS List Super Disc title has TWO AMAZING SIDES, including a side two that is White Hot! We have never heard a copy with such a huge hall sound and so much weight down low. As we said last time we did a shootout for this title in 2007: “DEMO DISC QUALITY ORCHESTRAL SOUND like you will not believe. Folks, it doesn’t get any better than this for huge orchestral dynamics and energy.”

As you know, if you’ve been on our site for any length of time at all, we’ve made a good number of significant improvements to our stereo and room since 2007, so it’s entirely accurate to say we have never heard this kind of Demo Disc sound for this album until now, because we haven’t!

A++. The hall is wide and deep as any you will hear. Tons of power and weight down low. A touch dark, otherwise it would have earned the full Three Plus top grade.

A+++, White Hot and Hard to Fault! The strings are so richly textured — who does it better than Wilkinson? Cymbal really crash on this side, something you rarely hear correctly reproduced on recordings.

This could easily become your go-to record for demonstrating not just the Power of the Orchestra, but the power of Old Analog! END_OF_DOCUMENT_TOKEN_TO_BE_REPLACED

More of the music of Modest Mussorgsky

Solti is clearly the man for this music! He’s on fire with this fiery material. THIS is the way you want to hear Russian Orchestral Showpieces — played with verve and dynamically ALIVE.  END_OF_DOCUMENT_TOKEN_TO_BE_REPLACED

This original London pressing of the solo piano version of Pictures has uncannily natural piano reproduction, which is why we are awarding this side one our highest sonic grade, A Triple Plus.

The fact that the recording takes place in Kingsway Hall in 1967 no doubt plays a large part in the superb sound. The hall is bigger here than on other copies, the piano even more solidly weighted, yet none of this comes at the expense of the clarity of the playing. There is no smear, allowing both the percussive aspects of the piano and the extended harmonics of the notes to be heard clearly and appreciated fully.

Side two has Mehta’s performance of the orchestrated work squeezed onto side two, which is never a good idea if one is looking for high quality orchestral sound. The performance itself is mediocre as well.

We are not, and never haver been, big fans of Mehta’s work with the Los Angeles Philharmonic on London. The exceptionally rare copy of The Planets can sound good, but 90% of them do not — just don’t make the mistake of telling that to the average audiophile who owns one. Harry told him it was the best, he paid good money for it, and until someone tells him different it had better be “the one Planets to own.”

We see one of our roles here at Better Records as being the guys who actually will “tell you different”, and, more importantly, can back up our opinions with the records that make our case for us. END_OF_DOCUMENT_TOKEN_TO_BE_REPLACED