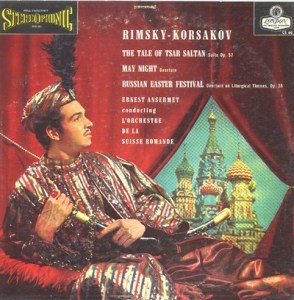 This is the kind of record that will make you want to take all your heavy vinyl classical pressings and put them in storage. None of them, I repeat not a single one, can begin to sound the way this record sounds. (Before you put them in storage or on Ebay please play them against this pressing so that you can be confident in you decision to rid yourself of their insufferable mediocrity.)

This London pressing contains a stunningly BEAUTIFUL Tale of the Tsar Saltan Suite. It’s clearly one of the great Demo Disc Quality recordings from the Golden Age (or any age for that matter), with everything that a top Golden Age Orchestral recording should have: all the magic; all the timbral and harmonic subtlety; all the sweetness and warmth; all the Tubey Magical richness.

All that and more. Folks, this is the kind of record that makes you sit up and take notice. Finally, HERE is the kind of sound that can bring an orchestra to life in your very own listening room.

It has the kind of depth and three-dimensional soundstaging that the recordings by Ansermet and the Suisse Romande are famous for. (Unlike some of their recordings — Pictures at an Exhibition comes readily to mind — the tempi here are not too slow. The tempi are in fact just right. We love the sound of Ansermet’s records but when the performance drags it’s hard to enjoy the music. For top quality performances of the work by other conductors — rarely in stock I regret to say — please check the site.)

The Triangle Is Key

This is a work that makes extensive use of the triangle, and I don’t know when I’ve ever heard a better recording of that instrument. (I think there are actually two being played.) It’s incredibly sweet, detailed and extended, without calling attention to itself in an unnatural manner. This is the kind of sound that no compact disc in the history of the world has ever managed to achieve. When you hear it, you know it, and I’m hearing it in my head as this is being written. (Want a good tweeter test next time you’re in the market for new speakers? Play a record with a well-recorded triangle. It’s a surprisingly hard instrument to reproduce.)