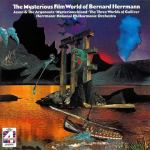 Reviews and Commentaries for the Music of Bernard Herrmann

This is an outstanding recording, with a huge three-dimensional stage. It’s open and clear, with an extended top and plenty going on down low. The sound on the best pressings is nothing short of amazing.

This is Demo Disc quality sound by any measure, especially on Big Speakers at Loud Levels.

If like us you’re a fan of Blockbuster Orchestral Recordings, this killer album from 1975 belongs in your collection.

Borrowing from the Best

One reason this music is so wonderful is because it’s been more or less lifted from, and orchestrated exactly like, Rimsky-Korsakov’s The Tale of Tsar Saltan.

Herrmann was no doubt familiar with Rimsky-Korsakov’s work, and knew that his “sound” was exactly the one that would work for the film. He overlayed his own compositional style onto Rimsky-Korsakov’s, and the result is a soundtrack of breathtaking beauty, full of exotic instrumental colors and delicious audiophile-candy percussion.

This Orchestral Spectacular should have a place of honor in any audiophile’s Classical Collection. Others that belong in that category can be found here.