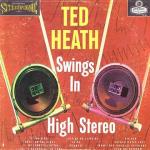 More Records that Are Good for Testing Tonality and Timbre

The highest fidelity vintage recordings are truly amazing if you can play them right. That’s a big if.

In fact, it may just be the biggest if in all of audio.

Be that as it may. What do we love about vintage pressings like the Ted Heath disc you see pictured?

The timbre of the instruments is hi-fi in the best sense of the word.

The unique sound of every instrument is being reproduced with remarkable fidelity on this old record.

That’s what we mean by “hi-fi,” not the kind of Audiophile Phony BS sound that passes for hi-fidelity on some records.

Older audiophile records, typically those made by Mobile Fidelity in the ’70s and ’80s, suffered from a common group of problems on practically every record they released:

A boosted top, a bloated bottom, and a sucked-out midrange.

Nowadays that phony sound is no longer in vogue. A new, but equally phony sound has taken its place.

These newer records, with few exceptions, tend to be compressed, thick, dull, opaque, veiled, recessed and lacking in ambience.

These are currently the hallmarks of the Heavy Vinyl LP. Whether made by Speakers Corner, DCC, AP or any other label, starting at some point in the mid-’90s, the sound these labels apparently preferred had an infuriating tonal balance problem we noted in practically every record we played — sound that was just too damn smooth.

The phony boosted highs of the bad old days are gone, replaced by the phony rolled off highs of today.

(Bernie Grundman cut hundreds of records for Classic Records starting in the ’90s, and it’s clear he chose to go a different way, but his way turned out to be every bit as problematical.)

Are the audiophiles who buy these new, super-smooth records any better off?

The ones with bright, phony systems probably are.

As we have been saying for years, first you need to have reasonably good sound. Then you can buy records that actually are good.

How do we know we are right about the tonality issues of these modern remasterings?

Stay tuned for part two of this commentary.

The Ideal System for an Exceptionally Well Recorded Album

It’s clear our stereo loves this record. Let’s talk about why that might be the case.

Our system is fast, accurate and uncolored. We like to think of our speakers as the audiophile equivalent of studio monitors, showing us exactly what is on the record, nothing added, and nothing taken away.

They do that by having their system add in all their favorite colorations. We call that “My-Fi,” not “Hi-Fi,” and we’re having none of it.