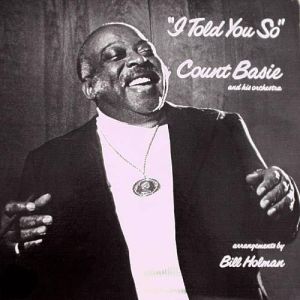 On the best pressings, the horns are so present and high-rez, not to mention full-bodied, this could easily become a favorite big band album to demo or test with — or just to enjoy the hell out of.

I never noticed until just now that the album cover picture for Farmer’s Market Barbecue and this album are exactly the same! Wow, Pablo, that takes balls.

On the best pressings, the horns are so present and high-rez, not to mention full-bodied, this could easily become a favorite big band album to demo or test with — or just to enjoy the hell out of.

I never noticed until just now that the album cover picture for Farmer’s Market Barbecue and this album are exactly the same! Wow, Pablo, that takes balls.

What We’re Listening For On I Told You So

Tube smear is common to most vintage pressings. The copies that tend to do the best in a shootout will have little or none, yet are full-bodied, tubey and rich.

This is one of Count Basie’s best big-band studio recordings for Norman Granz during his Pablo years. The arrangements by Bill Holman are both challenging and swinging, containing enough surprises to make this session a real standout.