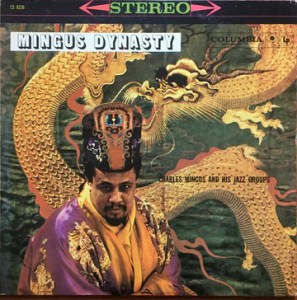 If innovative Large Group Jazz is your thing, you should get a big kick out of this one. If you like the sound of relaxed, tube-mastered jazz — and what red blooded audiophile doesn’t? — you can’t do much better than the Mingus recordings on Columbia from this era. (We’ve now done shootouts for the album before this one and the one to follow. Both are amazing, musically and sonically.) The warmth and immediacy of the sound here are guaranteed to blow practically any record of this kind you own right out of the water.

Both sides of this very special pressing are huge, rich, tubey and clear. As soon as the band got going we knew that this was absolutely the right sound for this music.

For we audiophiles, both the sound and the music here are enchanting. If you’re looking to demonstrate just how good 1960 All Tube Analog sound can be, this killer copy should be just the record for you.

It’s spacious, sweet and positively dripping with ambience. Talk about Tubey Magic, the liquidity of the sound here is positively uncanny. This is vintage analog at its best, so full-bodied and relaxed you’ll wonder how it ever came to be that anyone seriously contemplated trying to improve it.

This is the sound of Tubey Magic. No recordings will ever be made like this again, and no CD will ever capture what is in the grooves of this record. There is of course a CD of the album, but those of us in possession of a working turntable could care less.

We played a handful of later pressings that didn’t really do it for us. They offer improved clarity, but can’t deliver the tubey goodness that you’ll hear on the best early pressings. We won’t be bothering with them anymore. It’s tubes or nothing on this album.

What We’re Listening For On Mingus Dynasty

Teo Macero was the producer, Fred Plaut may have been the engineer for these sessions in Columbia’s glorious sounding 30th Street Studio. It’s yet another remarkable disc from the Golden Age of Vacuum Tube Recording.

Things Ain’t What They Used To Be
Far Wells, Mill Valley
New Now, Know How
Mood Indigo
Put Me In That Dungeon

Mingus Ah Um catapulted Charles Mingus from a much-discussed semi-underground figure to a near-universally accepted and acclaimed leader in modern jazz. Perhaps that’s why his Columbia follow-up, Mingus Dynasty, is often overlooked in his canon — it’s lost in the shadow of its legendary predecessor, both because of that album’s achievement and the fact that it’s just a notch below the uppermost echelon of Mingus’ work.

Having said that, Mingus Dynasty is still an excellent album; in fact, it’s a testament to just how high a level Mingus was working on that an album of this caliber could have gotten lost in the shuffle. There’s a definite soundtrack quality to a great deal of the music here, and indeed the majority of Mingus’ originals here were composed for film and television scores and an expanded, nine- to ten-piece group. On some pieces, Mingus refines and reworks territory he’d previously hit upon.