This is a tough album to get to sound right, as long-time readers of our site surely know, but here are the sides that prove this album can sound very good indeed. Looking for the best sound? Try “Till There Was You” on side one and “You Really Got A Hold On Me” on the flipside.

If you exclusively play modern repressings of vintage recordings, especially in the case of the new Beatles albums, I can say without fear of contradiction that you have never heard this kind of sound on vinyl. Old records have it — not often, and certainly not always — but maybe one out of a hundred new records do, and those are some pretty long odds.

What We’re Listening For On With The Beatles

Less grit — smoother and sweeter sound, something that is not easy to come by on With the Beatles.

A bigger presentation — more size, more space, more room for all the instruments and voices to occupy. The bigger the speakers you have to play this record the better.

More bass and tighter bass. This is fundamentally a Pure Pop record. It needs at least some weight down below to rock the way Norman Smith, The Beatles long-suffering engineer, wanted it to.

So many Parlophone copies would have you think With The Beatles is a gritty, edgy, crude recording — especially if you made the mistake of buying an early pressing. The early pressings are consistently grittier, edgier and more crude than the later pressings we played. So much for that old canard “original is better.” When it comes to With The Beatles it just ain’t so, and it doesn’t take a state-of-the-art system or a pair of golden ears to hear it.

The audiophile community seems not to have caught on to the faults of the early Beatles pressings, but we here at Better Records are doing our best to correct their all-too-common misperceptions, one Hot Stamper pressing at a time.

Where Can I Find Your Mono Beatles Records? 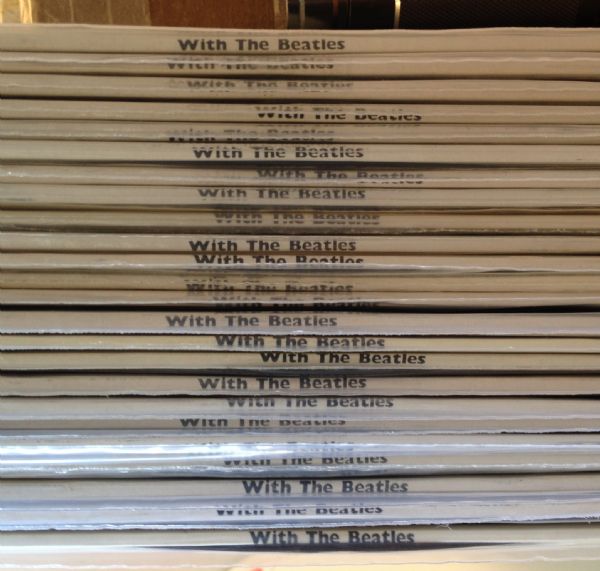 We do not sell Beatles records in mono.

And they didn’t even do the stereo mixes right some of the time, in our opinion. But wall to wall beats all stacked up in the middle any day of the week.

A Tough Record To Play

With The Beatles ranks fairly high on our Difficulty of Reproduction Scale. Do not attempt to play it using anything other than the highest quality equipment.