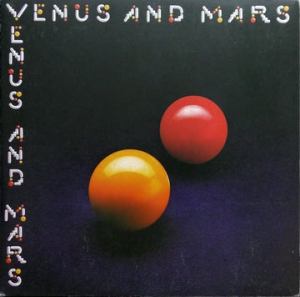 This original UK Capitol pressing has the kind of Tubey Magical Midrange that modern records can barely BEGIN to reproduce. Folks, that sound is gone and it sure isn’t showing signs of coming back. If you love hearing INTO a recording, actually being able to “see” the performers, and feeling as if you are sitting in the studio with the band, this is the record for you. It’s what vintage all analog recordings are known for — this sound.

This vintage UK Capitol pressing has the kind of Tubey Magical Midrange that modern records can barely BEGIN to reproduce. Folks, that sound is gone and it sure isn’t showing signs of coming back. If you love hearing INTO a recording, actually being able to “see” the performers, and feeling as if you are sitting in the studio with the band, this is the record for you. It’s what vintage all analog recordings are known for — this sound.

What We’re Listening For On Venus and Mars

Latest effort from Paul McCartney and friends is another set of fine rock, but with some strong basic differences from past LPs. First, it stands less as a collection of good rock singles and more as a collection of various styles of music that can also work as singles.

Styles range from the perfect Top 40 rock McCartney is such a master of, to New Orleans horn filled cuts, to ’20s flavored tunes, to oldie sounding songs, to some big brass arrangements. McCartney’s vocals range from the smooth ballad style he has always handled well to a raunchier rock sound that he has heretofore been unable to attain, even on his wilder singles. In other words, he sounds less like a soft voice singer trying to scream and more like a legitimate screamer.

Addition of Jimmy McCulloch has added a strong rock guitar vein and has allowed Denny Laine to switch to bass and spend more time on vocal harmonies. Linda also sounds like more of a singer. Guest musicians like Tom Scott, Allen Toussaint and Dave Mason also add to the variety of sounds and add an authenticity to the sounds and styles explored.

A much more musically intricate project than Wings’ other solo effort without losing the feeling of fun and spontaneity that good rock has always offered. And, to serve up the old cliche, all possible singles.

Superficially, which counts for a lot with McCartney, his New Orleans venture is his most appealing post-Beatles album — straight rock and roll with a few pop detours and one excursion into “When I’m 64” nostalgia. So clear in its melodies, mix, and basic pulse that his whimsical juxtapositions — robots on Main Street, Rudy Vallee cheek by jowl with Allen Toussaint — sound like they might make some sense. Don’t get me wrong — they probably don’t — because McCartney’s a convinced fool. But when the music is coherent it doesn’t matter so much. B+