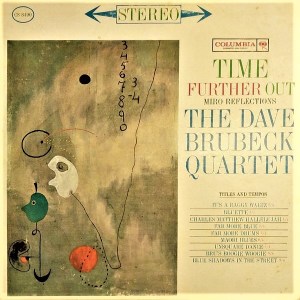 If you want to hear big drums in a big room these Brubeck recordings will show you that sound better than practically any record we know of. These vintage recordings are full-bodied, spacious, three-dimensional, rich, sweet and warm in the best tradition of an All Tube Analog recording.

This Columbia 6-Eye Stereo pressing has the kind of Tubey Magical Midrange that modern records can barely BEGIN to reproduce. Folks, that sound is gone and it sure isn’t showing signs of coming back. If you love hearing INTO a recording, actually being able to “see” the performers, and feeling as if you are sitting in the studio with the band, this is the record for you. It’s what vintage all analog recordings are known for —this sound.

If you have full-range speakers, some of the qualities you may recognize in the sound of the piano are WEIGHT and WARMTH. The piano is not hard, brittle or tinkly. Instead, the best copies show you a wonderfully full-bodied, warm, rich, smooth piano, one which sounds remarkably like the ones we’ve all heard countless times in piano bars and restaurants.

In other words like a real piano, not a recorded one. This is what we look for in a good piano recording. Bad mastering can ruin the sound, and often does, along with worn out stampers and bad vinyl and five gram needles that scrape off the high frequencies. But a few — a very few — copies survive all such hazards. They manage to reproduce the full spectrum sound of the piano (and of course the wonderful performances of the musicians) on vintage vinyl, showing us the kind of sound we expect from a top quality early Brubeck album.

The one standout track on this album for audiophiles is surely “Unsquare Dance,” what with its uncannily real sounding handclaps in 7/4. The copies that did the best job of reproducing that ‘flesh on flesh’ sound of actual human hands clapping scored very well in our shootout.

Teo Macero was the producer, and the superbly talented Fred Plaut the engineer.

What We’re Listening For On Time Further Out

More To Listen For

On side two, the first track has the Wall to Wall Big Drums in a Big Room sound that positively blows our minds.

If you own the Impex pressing from 2011 and would like to hear precisely what you’ve been missing all these years, we would love to send you one of our Hot Stampers. It has the spatial and musical information that no Impex reissue we’ve ever heard is capable of reproducing.

Their LP will surely be quieter, but that’s cold comfort in our book. The sense that you are in the studio with Brubeck, Desmond, Morello, and Wright is something that the best vintage records can do surprisingly well. In our experience, modern records do a much poorer job of transporting you into that space. If you own their LP we encourage you to give one of ours a try. The difference may surprise you.

Time Further Out is a recording that belongs in any serious Jazz Collection. Others that belong in that category can be found here.

The selections, which range in time signatures from 5/4 to 9/8, are handled with apparent ease (or at least not too much difficulty) by pianist Brubeck, altoist Paul Desmond, bassist Eugene Wright and drummer Joe Morello on this near-classic.

Time Further Out extends upon the concepts first enunciated on the Brubeck Quartet’s surprise hit Time Out, but in this case with the organizing principles involving the leader’s varied compositional treatments of the blues — traditional and otherwise.

Thus a darkly ruminative tune such as “Bluette” treats a fairly standard 12-bar form in a very non-standard manner, interpolating a variety of classical devices that suggest the melodic influence of Chopin and the contrapuntal devices of Bach in its treatment, with a yearning alto solo from saxophonist Paul Desmond that suggests the emotional content of a blues, without specifically referring to standard devices.

As if to italicize his band’s mastery of polymeter, pianist Brubeck treats the fifth, sixth, seventh, eighth, and ninth tunes in corresponding meters, to particular effect on the 7/4 hoedown of “Unsquare Dance,” the 8/8 barrelhouse changes of “Bru’s Boogie Woogie” and the engaging dissonances of his 9/8 mood piece “Blue Shadows in the Street.”

And on “Far More Drums,” drummer Joe Morello displays a mastery of 5/4 metric variations and African-styled polyrhythms that was unheard of for that time, save for percussive grandmasters such as Max Roach.
— Chip Stern

Mark Wilder was interviewed about the recording of these Fred Plaut sessions.