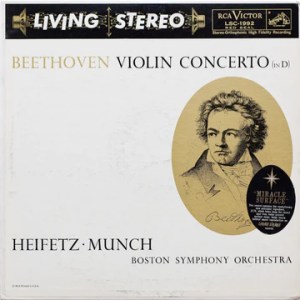 Heifetz is a fiery player. On a good pressing such as this one, you will hear all the detail of his bowing without being overpowered by it. As we listened we became completely immersed in the music on the record, transfixed by the remarkable virtuosity he brings to such a difficult and demanding work.

This copy had relatively little smear on either the violin or the orchestra. Try to find a violin concerto record with no smear. We often say that Shaded Dogs, being vintage All Tube recordings, tend to have tube smear. But what about the ’70s Transistor Mastered Red Label pressings — where does their smear come from?

Let’s face it: records from every era more often than not have some smear and we can never really know what accounts for it. The key thing is to be able to recognize it for what it is. (We find modern records, especially those pressed at RTI, to be quite smeary as a rule. They also tend to be congested, blurry, thick, veiled, and ambience-challenged. For some reason most audiophiles — and the reviewers who write for them — rarely seem to be bothered by these shortcomings, if they notice them at all.)

Of course, if your system itself has smear — practically every tube system I have ever heard has some smear; it comes with the territory — it becomes harder to hear smear on your records. Our current low-powered, all-transistor rig has no trouble showing it to us.

Keep in mind that one thing live music never has is smear of any kind. Live music is smear-free. It can be harmonically distorted, hard, edgy, thin, fat, dark, and fail in any number of other ways, but one thing it never is, is smeary. That is a shortcoming unique to the reproduction of music, and one for which many of the pressings we sell are downgraded.

What We’re Listening For On This Wonderful Classical Release

A Must Own Violin Recording by a True Master

This wonderful violin concerto — one of the greatest ever composed — should be part of any serious Living Stereo Classical Collection.

The Violin Concerto in D Major