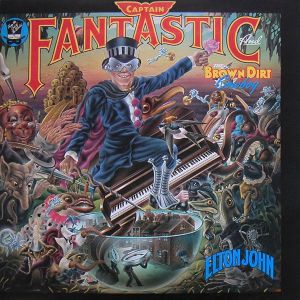 This vintage DJM pressing has the kind of Tubey Magical Midrange that modern records can barely BEGIN to reproduce. Folks, that sound is gone and it sure isn’t showing signs of coming back. If you love hearing INTO a recording, actually being able to “see” the performers, and feeling as if you are sitting in the studio with the band, this is the record for you. It’s what vintage all analog recordings are known for — this sound.

The Last of the Classics

Besides being the most commercially successful period, 1970–1976 is also held in the most regard critically. Within only a three-year span, between 1972 and 1975 John saw seven consecutive albums reach number one in the US, which had not been accomplished before.

Of the six Elton John albums to make Rolling Stone’s list of “The 500 Greatest Albums of All Time” in 2003, all are from this period, with Goodbye Yellow Brick Road ranked highest at number 91; similarly, the three Elton John albums given five stars by Allmusic (Tumbleweed Connection, Honky Château, and Captain Fantastic) are all from this period.