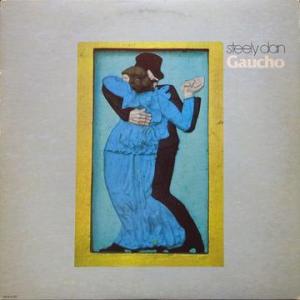 Every instrument taking part in this complex, richly imagined sonic tapestry sits perfectly in its own place, and, more importantly for we audiophiles, its own SPACE.

The average pressing we auditioned was somewhat opaque and compressed, throwing a veil over the vocals and setting them further back on the stage.

Not this copy – the transparency and dynamics are superb, highlighting Donald Fagen’s moody, emotive singing while his ensemble of Hand-Picked Studio Cats wails away behind him with abandon (but not too much abandon; can’t lose our Steely Dan cool don’t you know).

Add a handful of Oh-So-Sultry Female Vocalists to sex it up and you have one transcendent musical experience.

What We’re Listening For On Gaucho

Few copies are capable of giving us the feeling we got from this LP — that ethereal illusion of being in the room while the band is playing. People really go crazy over this kind of sound. Records like this are few and far between, but when you find one, the effect it can have on you may make you go a little overboard too.

You might even feel the need to write us a letter. It’s the kind of experience that compels you to find some way to share it with the world. The problem is that those reading your letter don’t have a copy with the kind of sound you have, and they therefore can’t experience the music the way you can. If they haven’t heard it for themselves, it’s all just talk, the kind of crap you can read on any internet forum about any piece-of-junk record ever made.

That’s why we love to hear from people who’ve actually played the very same record we did. We know why they’ve flipped out. We flipped out too!

Of all the great albums Steely Dan made, and that means their seven original albums and nothing that came after, there are only three in our opinion that actually support their reputation as studio wizards and recording geniuses. Chronologically they are Pretzel Logic, Aja, and Gaucho. Every sound captured on these albums is so carefully crafted and considered that it practically brings one to tears to contemplate what the defective DBX noise reduction system did to the work of genius that is Katy Lied, their best album and the worst sounding.

The first two albums can sound very good, but none of those can compete with The Big Three mentioned above for sonics. A Hot Stamper copy of any of them would be a serious DEMO DISC on anyone’s system.

The Tracklist below will take you to a select song breakdown for each side, with plenty of What to Listen For advice. Other records with track breakdowns can be found here.

The tom intro is a great test for transparency. On most copies those opening drums are flat and lackluster. When it’s done right, you can hear the room around the drums, and that’s a mighty fine sounding room!

Also, pay attention to the bell in the left channel at the beginning of the song – if it’s sharp and doesn’t really sustain, you’re probably dealing with the typical extension-challenged copy. If it’s shimmery with a natural sounding decay you may very well be in store for some great sound.

On most copies the saxophone that intermittently pokes its head out will get smoothed over, losing its bite and getting lost in the mix. Much the same can be said for the background singers — they can easily sound veiled and get lost in the mix.

From the time they start singing “Babylon sisters” until they reach the final “shake it!”, there should be a growing crescendo of volume and intensity.

Probably the most memorable track on the album, and consistently the best sound as well. This track is a great test for low end and bass definition. The average copy is usually punchy but more often than not lacks any real weight.

Somewhat better copies may have a full low end but fall short in terms of definition on the bass guitar.

The best copies have it all going on: a meaty bottom with all the intricacies of Walter Becker’s bassline clearly audible.

Another classic Fagen/Becker track with a powerful sax intro. Not unlike the aforementioned sax in “Babylon Sisters,” the standard copy fails to convey the horn’s texture and dynamic subtleties. If such is the case, it will come back to haunt you by the time the vocals come in, as they are often compressed and spitty.

Please note the piano right before the first verse starts. Our best copies allow it to be both delicate and full-bodied, as opposed to the usual honky tonk clanker some pressings present you with.

Time Out of Mind

Michael McDonald is the man! Just thought I’d throw that out there.

Note that Larry Carlton’s signature sound is all over this track. He’s got that great high-gain, feedbacky guitar tone that works so well for this angular music. You may remember him from a record called Aja… Played a lot of the solos on Royal Scam too as I recall. I have a feeling we’ll be hearing from Larry again in the not-too-distant future…