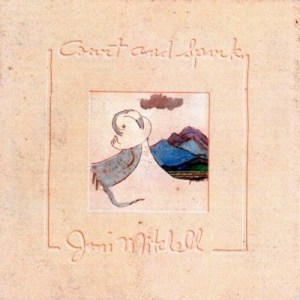 Court and Spark deserves to be heard with all the clarity, beauty and power that our Hot Stampers reproduce so well. If there is a better sounding album with Joni Mitchell’s name on the cover, you’ll have to prove it to us.

What you hear is the sound of the real tape; every instrument has its own character because the mastering is correct and the vinyl — against all odds — managed to capture all (or almost all; who can know?) of the resolution that the tape had to offer.

This early Asylum pressing has the kind of Tubey Magical Midrange that modern records cannot even BEGIN to reproduce. Folks, that sound is gone and it sure isn’t showing signs of coming back. If you love hearing INTO a recording, actually being able to “see” the performers, and feeling as if you are sitting in the studio with the band, this is the record for you. It’s what vintage all analog recordings are known for — this sound.

There are loud vocal choruses on many tracks, and more often than not at their loudest, they sound like they are either breaking up or threatening to do so. I always assumed it was compressor or board overload, which is easily heard on Down to You. On the best copies, there is no breakup — the voices get loud and they sound clean throughout.

What We’re Listening For on Court and Speak

We consider this album one of Joni’s Masterpieces. (The other would of course be Blue.) It should be part of any serious popular Music Collection.

Car On A Hill
Down To You

Want s super quick check for resolution on side two? Listen for the amount of air moving through the flute on this track. Breathy, sweet sounding flutes with no trace of grit or grain are a good indication of high-resolution, transparent, natural sound in the mids and highs.

Just Like This Train
Raised On Robbery
Trouble Child
Twisted

Joni Mitchell reached her commercial high point with Court and Spark, a remarkably deft fusion of folk, pop, and jazz which stands as her best-selling work to date. While as unified and insightful as Blue, the album — a concept record exploring the roles of honesty and trust in relationships, romantic and otherwise — moves away from confessional songwriting into evocative character studies: the hit “Free Man in Paris,” written about David Geffen, is a not-so-subtle dig at the machinations of the music industry, while “Raised on Robbery” offers an acutely funny look at the predatory environment of the singles bar scene.

Much of Court and Spark is devoted to wary love songs: both the title cut and “Help Me,” the record’s most successful single, carefully measure the risks of romance, while “People’s Parties” and “The Same Situation” are fraught with worry and self-doubt (standing in direct opposition to the music, which is smart, smooth, and assured from the first note to the last).

By 1973, Joni Mitchell was searching for a new sound. On albums like Clouds and Blue, she had accompanied herself on piano and acoustic guitar, and progressed from folkie waife to sophisticated chronicler of the gender wars. She needed musical arrangements that matched the complexity of her lyrics.

Tom Scott had played woodwinds on Mitchell’s previous album, For the Roses (1972), and she decided to do some sessions with his jazz-rock band, the L.A. Express. The result is Court and Spark, an album that not only represents the culmination of Mitchell’s folk-rock period but also signals the many musical experiments in her future.

Released at the end of 1973, “Raised on Robbery,” the album’s first single, caught all the humor and energy that had always been part of Mitchell’s personality but that had barely found a place in her music. The second single, “Help Me,” showed the flip side of Mitchell’s sensibility — the romantic dreamer, swept up in the currents of desire and uncertain about where they are carrying her or even where she wants to go. “We love our lovin’/But not like we love our freedom,” she sings in lines that summarize the dueling impulses in so many of her songs.

Playing behind her, musicians like Scott, guitarist Larry Carlton, drummer John Guerin and trumpeter Chuck Findley add colors and depth to songs that stretch melodies and vocal lines in surprising directions. And as always with Mitchell, the lyrics penetrate deftly to the painful core of feeling beneath the requisitely cool coupling of the early Seventies. When she sings, in a kind of prayer, “Send me somebody/Who’s strong and somewhat sincere,” her reduced expectations (this was the age of less is more, remember) seem both poignant and desperate, Court and Spark was — and still is — Mitchell’s most commercially successful album. In another sign of the times, she was defeated the following year in two major Grammy categories by Olivia Newton-John. That’s why the criterion of “standing the test of time” was invented — a standard that Court and Spark will always meet. * * * * * (Five Stars)