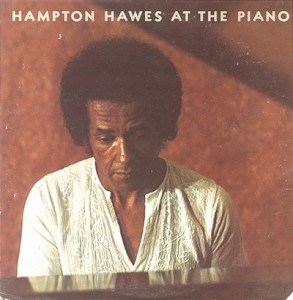 This is my favorite Hampton Hawes record of all time. He died less than a year after these sessions. Looking at the cover, you can almost see in his face his acceptance of the end he knew was coming. He plays with deep emotion here.

As good as The Three may be, it is not remotely as natural sounding as this Contemporary recording by Roy DuNann. Due to the multi-miking approach Lee Herschberg took for the session, Shelly Manne’s drums on The Three stretch from speaker to speaker, presenting us with a drummer whose arms are impossibly long. On this Contemporary recording the drummer is placed in the soundfield in one fixed location and his drum kit is the size of a standard jazz kit of the ’50s. I’m good with either approach, but there’s no question which one is more natural.

Drop the needle on “Blue In Green” on side two — the sound of the bowed bass is WONDERFUL. The version of “Killing Me Softly With His Song” that opens the album is especially lovely. (One high point of this album is the interview that Lester Koenig conducts with Hampton Hawes on the back cover. Lester died soon thereafter himself.)

What We’re Listening For On At The Piano

We consider this final album from Hampton Hawes to be a Masterpiece. It’s a recording that belongs in any serious Jazz Collection.

Killing Me Softly With His Song
Soul Sign Eight
Sunny

Morning
Blue In Green
When I Grow Too Old To Dream

Hampton Hawes’ final recording found him returning not only to the acoustic piano after having dabbled in electric keyboards from 1972-74, but to producer Lester Koenig and his Contemporary label, where Hawes recorded most of his classic gems of the 1950s. Teamed up with bassist Ray Brown and drummer Shelly Manne, Hawes shows that he was still in prime form. The trio plays two of Hawes’ originals, some current and worthwhile pop tunes (“Killing Me Softly With His Song” and “Sunny”), and “Blue In Green” and “When I Grow Too Old to Dream.”