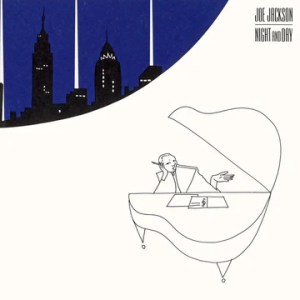 Night and Day is Joe Jackson’s masterpiece. It’s simply WONDERFUL from start to finish. This is adult popular music that belongs in any serious thinking person’s record collection. Not many records from the ’80s sound as natural as this one. It’s analog, that’s for damn sure.

There is no guitar on this record. The piano carries much of the structural energy of the music. You need to be able to hear the piano clearly and hear that it is both full-bodied and percussive.

The list of percussion instruments played on this record is long indeed, with congas, bongos, timbales, bells and let us not forget the all-import xylophone. (See the Musicians and Instruments tab above.) Most copies don’t have the extension on the top end to reproduce the harmonics of most of the higher-frequency instruments, but the few that do can show you a world of sound that the other pressings barely hint at.

The percussion also drives the rhythmic energy and fills out the studio space above the vocals. The energy level drops when these instruments aren’t heard properly, and the space of the music shrinks in proportion as well.

Another critically important element in a pop/rock record, and especially important to this one. The thinner, somewhat leaned-out copies emphasize the mids and upper-mids too much. They tend to be harsher and more unpleasant. The ones with clear, tight bass and solid drums to anchor the arrangements naturally work the best.

What We’re Listening For On Night and Day

Most reissues are clearly made from sub-generation tapes. They sound smeared and dead and are guaranteed to bore you to tears. With the right originals, the sound is MAGIC.

Lesser original copies can be grainy, irritating, flat and lifeless. Nothing new there, right? You have to work to find a good Night and Day — or buy one from us because we’ve already done the work!

We consider this Joe Jackson album his Masterpiece. It’s a recording that should be part of any serious popular Music Collection.

1982 will forever be known as the year that the punks got class — or at least when Joe Jackson and Elvis Costello, rivals for the title of Britain’s reigning Angry Young Man — decided that they were not just rockers, but really songwriters in the Tin Pan Alley tradition. Both had been genre-hopping prior to 1982, but Jackson’s Night and Day and Costello’s Imperial Bedroom announced to the world that both were “serious songwriters,” standing far apart from the clamoring punkers and silly new wavers.

Night and Day had greater success because it’s sleek and bright, entirely more accessible than the dense, occasionally unwieldy darkness of Imperial Bedroom. Plus, Jackson plays up the comparisons to classic pop songwriting by lifting his album title from Cole Porter, dividing the record into a “night” and “day” side, and then topping it off with a neat line drawing of him at his piano in a New York apartment on the cover.

All of these classy trappings are apparent on the surface… his blend of percolating Latin rhythms, jazzy horns and pianos, stylish synths, and splashy pop melodies uncannily feel like a bustling, glitzy evening in the big city. On that front, Night and Day is a success, since it creates a mood and sustains it very well.

There is, of course, the breakthrough hit “Steppin’ Out,” which pulsates anticipatory excitement, but the aching “Breaking Us in Two” is just as good, as is the haunting “Real Men” and the album opener, “Another World,” a vibrant, multi-colored song that perfectly sets up the sonic and lyrical themes of the album.