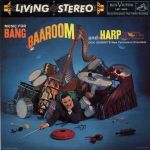 Reviews and Commentaries for the Music of Dick Schory

Presenting another one of the many pressings we’ve discovered with Reversed Polarity on some copies.

An amazing discovery from Better Records. Many copies of this album are REVERSED POLARITY on side two (the side with Buck Dance, one of the better tracks on that side and great for testing).

Yes, once again you heard it here first, folks. We had two 4s copies of the album and both of them had side two out of polarity.

Excerpts from Our Commentary from Way Back When

Reversing the absolute phase on this record today was a REVELATION. There before me was all the ambience, openness, sweetness, silkiness and warmth I had come to expect from the best pressings of this longtime member of HP’s TAS List of Super Discs, a record that really is a Super Disc when you hear a good one, and this is a very very good one indeed, on side two anyway.

You need a special key to unlock the magic of a pressing such as this. You must either switch the positive and negative at the speaker, the amp, or at the head shell leads, or you must have a switch that inverts phase on your preamp or phono stage. (The EAR 324p we use has just such a switch and let me tell you, it comes in very handy in situations like these.) If you can’t do any of those, or are unwilling to do any of those, this is not the record for you.

What do you hear when you switch the polarity on side two? The top end comes back! This album was sounding very dull and closed in, not usually the sign of reversed phase. Not having a lot of tools in our toolbox to try, we just took a chance and flipped the phase. Wow! Now the top end sounding amazingly extended and open. Practically everything else got better too.

Are all copies reversed polarity? Definitely not. I know I’ve played amazing side twos that had to have been in correct polarity. If you have a copy of the album and it lacks top end extension, try reversing the polarity, you may be in for quite a shock.

More Records that Are Good for Testing Treble Issues

More Records that Are Good for Testing High Frequency Extension