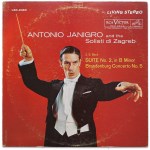 We were often wrong back in those days, something we have no reason to hide. Audio equipment and record cleaning technologies have come a long way since then.

Nowadays, 99% (or more!) of the records we sell are cleaned, then auditioned under rigorously controlled conditions along with a number of other pressings, awarded sonic grades, then carefully condition checked for surface noise.

As you may imagine, this approach requires a great deal of time, effort and skill, which is why we currently have a highly trained staff of about ten. No individual or business without such a committed group could possibly dig as deep into the sound of records as we have, and it is unlikely that anyone, besides us, would ever be able to do the kind of work we do.