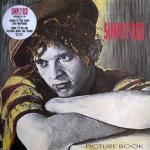 More of the Music of Simply Red

I actually used to demonstrate my stereo with “Sad Old Red.” At one point the sound really explodes, an effect which has always had a strong appeal for me. That’s what live music does and that’s what I want my stereo to do.

For thirty [now 45+] years I’ve avoided little boxes and screens and gone straight for the big dynamic speaker systems that can really show you the life that’s hiding in your recordings.

That’s what the Revolutionary Changes in Audio commentary is all about — unlocking all the energy and excitement that a good LP has to offer.

I still remember standing in a record store — I think it was Tower; I lived in San Diego at the time and went there often — when I heard a song I could not quite place. Eventually I realized it was “Heaven” from Fear of Music, but it wasn’t The Talking Heads singing it.

I bought the album, one I knew next to nothing about, on the spot. Any band that wants to cover The Talking Heads is a band with taste, and once I got the album home I knew this band had plenty of talent too.

This is a BIG SPEAKER recording. It requires a pair of speakers that can move air with authority below 250 cycles and play at loud levels. If you don’t own speakers that can do that, this record will never really sound the way it should.

“The band finds a steady R&B groove reminiscent of ’60s Stax house band the MG’s, and, as with the MG’s, it’s all in the service of a big-voiced soul singer, in this case a British redhead.”