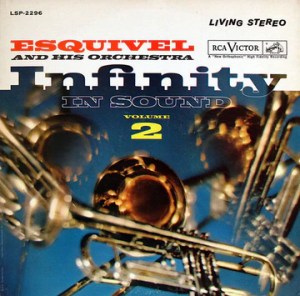 What The Best Sides Of Infinity In Sound, Vol. 2 Have To Offer Is Not Hard To Hear

What We’re Listening For On Infinity In Sound, Vol. 2

Infinity in Sound Vol. 2 builds on the strength of the first volume and earlier successes. Two tracks feature whistling, one of which is the beautiful, exotic Latin tune “Baia.” Other standouts include “Anna (El Negro Zumbon),” “Who’s Sorry Now,” and “Limehouse Blues.” This may be the Esquivel album that has it all: his signature style and sound, some experimentation (whistling), and an even mix of Latin and non-Latin standards. It may be the most representative of Esquivel’s U.S. releases, although not the greatest.