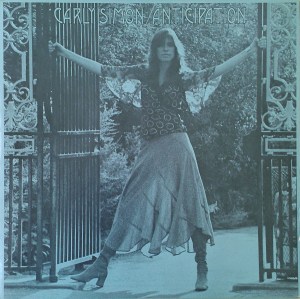 The Big Sound We Love

Drop the needle on Legend In Your Own Time for some of the best sound and music on the album. The overall sound is open and transparent, with real depth to the soundfield and lots of separation between the instruments.

The one word that comes to mind is BIG — this record gives you The Big Sound that Carly was no doubt going for.

When you hear the incredibly lush, highly detailed acoustic guitars on this record, you won’t be surprised to find out that the album was produced by Mr. Paul Samwell-Smith, who handles the same duties on Tea For The Tillerman and Teaser And The Firecat. You’ll hear his signature sound all over this album, particularly on the track I’ve Got To Have You.

That’s not to say that we’d put this recording on the same level with those audiophile knockouts, but the richness and the sweetness of the midrange on the best copies is exactly what you’d expect from the team of Samwell-Smith and Carly Simon.

What We’re Listening For on Anticipation

Carly Simon’s second album found her extending the gutsy persona she had established on her debut album, notably on the title track and “Legend in Your Own Time” (both of them hit singles), and “I’ve Got to Have You.” The latter especially suggested a frankly passionate person whose vulnerability was a source of strength, not weakness, a valuable feminist trait and one Simon would pursue in her later work.