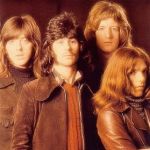 If you played it at all, you played it once and put it away on a shelf where it probably sits to this very day. Good records get played and bad records don’t. If you have lots of pristine records on your shelves, ask yourself: Why haven’t you played them?