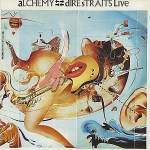 The best domestic pressings we heard, the ones cut by Robert Ludwig at Masterdisk, were simply not competitive with any of the early British LPs.

If you’ve played as many records as we have, it’s not hard to recognize dubby sound when you hear it.