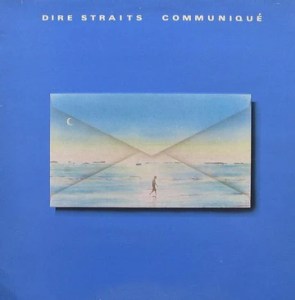 This pressing is super spacious, sweet and positively dripping with ambience. Talk about Tubey Magic, the liquidity of the sound here is positively uncanny. This is vintage late-’70s analog at its best, so full-bodied and relaxed you’ll wonder how it ever came to be that anyone seriously contemplated trying to improve it.

This is the sound of Tubey Magic. No recordings will ever be made like this again, and no CD will ever capture what is in the grooves of this record. There may well be a CD of this album, but those of us in possession of a working turntable and a good collection of vintage vinyl could care less.

What the best sides of Communique from 1979 have to offer is not hard to hear:

What We Listen For on Communique

Once upon a Time in the West
News
Where Do You Think You’re Going?
Communiqué

…an album full of the delicate subtleties that make Mark Knopfler shimmer — that deep tobacco-soaked voice, the quick, fluid guitar, and the wit behind many of his lyrics.

Knopfler possesses the too-often-ignored ability to understate just the right elements and come out with something that knocks attentive listeners on their asses. It’s a gift that has never been overly abundant in popular music, but when it’s discovered, it’s a rich, abundant source of beauty. Dire Straits’ Communiqué is precisely that kind of album. It has the reputation of being one of the lesser Dire Straits offerings, and yet, it seems, for the right listeners, this album ascends to the status of “favorite.” I may start considering myself one of those listeners.