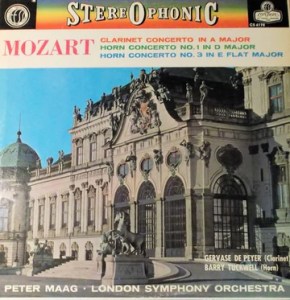 What We’re Listening For on Mozart’s Concertos

Not sure if we would still agree with what we wrote back in the ’90s when their pressing came out, but here it is anyway.

One of the best of the Deccas. I raved about this one years ago when it came out. If I had to pick a record to demonstrate how wonderful Decca recordings are, musically and sonically, this would be an easy choice.

If you have any Heavy Vinyl reissue of this recording, we would love to send you this one so that you can hear what you’ve been missing all these years. And if the difference in sound isn’t worth the difference in price, feel free to return this one to us and we will happily pay the domestic shipping back.

Clarinet Concerto in A Major

As there is no autograph for this concerto and as it was published posthumously, it is difficult to understand all of Mozart’s intentions. The only relic of this concerto written in Mozart’s hand is an excerpt of an earlier rendition of the concerto written for basset horn in G (K. 584b/621b). This excerpt is nearly identical to the corresponding section in the published version for A clarinet.

Mozart originally intended the piece to be written for basset horn, as Anton Stadler was also a virtuoso basset horn player, but eventually was convinced the piece would be more effective for clarinet. However, several notes throughout the piece go beyond the conventional range of the A clarinet; Mozart may have intended the piece to be played on the basset clarinet, a special clarinet championed by Stadler that had a range down to low (written) C, instead of stopping at (written) E as standard clarinets do.

Even in Mozart’s day, the basset clarinet was a rare, custom-made instrument, so when the piece was published posthumously, a new version was arranged with the low notes transposed to regular range. This has proven a problematic decision, as the autograph no longer exists, having been pawned by Stadler, and until the mid 20th century musicologists did not know that the only version of the concerto written by Mozart’s hand had not been heard since Stadler’s lifetime. Attempts were made to reconstruct the original version, and new basset clarinets have been built for the specific purpose of performing Mozart’s concerto and clarinet quintet.

This is one of two horn concertos of Mozart to include bassoons (the other is K. 447), but in this one he “treats them indifferently in the first movement.” It is the only one of Mozart’s horn concertos to be in D major (the rest are in E-flat major) and the only one to have just two movements instead of the usual three (with the exception of the incompletely scored horn concerto, K. 370b+371).

Although numbered first, this was actually the last of the four to be completed. Compared to the other three horn concertos, it is shorter in duration (two movements rather than three) and is much simpler in regard to both range and technique, perhaps in a nod to the horn player (Mozart’s great friend) Leutgeb’s advanced age and (presumably) reduced capabilities at the time of composition. The second movement, K. 514, was shown by Alan Tyson to have been finished by Mozart’s student Franz Xaver Süssmayr after Mozart’s death.

The composition was written as a friendly gesture for the hornist Joseph Leutgeb (his name is mentioned few times in the score), and Mozart probably did not consider it as particularly important, since he failed to enter it to the autograph catalogue of his works. The autograph score remained well preserved; it is stored in the British Library in London.