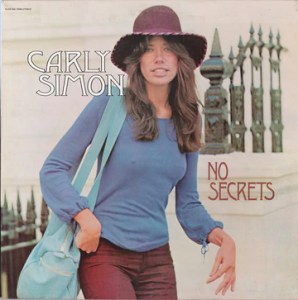 We’re big fans of Another Passenger, the album she cut in 1976 with Ted Templeman producing. If you like Carly, you should definitely check that one out.

The immensely talented engineer Robin Geoffrey Cable worked his analog Bigger Than Life Audio Magic on this album. You may recall that he recorded a number of the greatest sounding rock records of all time, Elton John’s self-titled second album and Tumbleweed Connection, both in 1970, as well as Nilsson Schmilsson in 1972, with Richard Perry producing.

Bill Schnee (of Sheffield Direct to Disc fame) did the mix.

What We’re Listening For on No Secrets

A wonderful song and a good test track to boot. On the best copies the bass will be deep and well-defined, and one can expect the vocals to have a lovely breathy quality.

Ah, but when it’s extended and correct everything else seems to fall into place. That’s why this song is such a good test track. If the voices sound smooth but you still have extension up top you know your copy has been mastered and pressed properly.

Embrace Me, You Child

Focus on the strings. On most copies they’re either aggressively shrill when loud or they are smeared and lack texture. When they sound rich and clear though they can really be lovely.

Waited So Long
It Was So Easy

The pedal steel guitar on the best copies is surrounded by ambience and should have plenty of warmth and Tubey Magic.

Night Owl
When You Close Your Eyes

Carly Simon’s best album, No Secrets was also her commercial breakthrough, topping the charts and going gold, along with its leadoff single, You’re So Vain. That song set the album’s saucy tone, with its air of sexually frank autobiography (“You had me several years ago/When I was still quite naïve”) and its reflections on the jet-set lifestyle. But Simon’s honesty meant that her lyrical knife was double-edged; now that she felt she had found true love (“The Right Thing to Do,” another Top Ten hit, was her celebration of her relationship with James Taylor), she was as willing to acknowledge her own mistakes and regrets as she was to point fingers.

But it wasn’t only Simon’s forthrightness that made the album work; it was also Richard Perry’s simple, elegant pop/rock production, which gave Simon’s music a buoyancy it previously lacked.