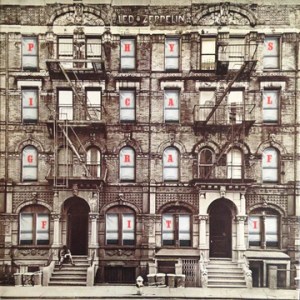 A distinguished member of the Better Records Rock Hall of Fame and another in the long list of recordings that really comes alive when you Turn Up Your Volume .

If you’ve been waiting for a seriously powerful Kashmir Experience, today is your lucky day.

I want to make one thing clear: some of this material is never going to be Demo Disc Quality. Many tracks are well-recorded and have the potential for superb sound but, as with virtually every double album we’ve ever played, there are a lot of loose ends here.

That said, songs like In My Time Of Dying, The Rover, Houses Of The Holy, and Ten Years Gone can sound amazingly good on the best copies.

What We’re Listening For on Physical Graffiti

Most domestic copies have smeary, sub generation sound with way too much tape hiss and not nearly enough energy.

The Classic is tonally correct, but it’s dead as a doornail. Where’s the life of the music? It’s not quite as bad as their Houses of the Holy, but it certainly ain’t one of their best either.

For our shootout for Physical Graffiti we had at our disposal a variety of pressings that had the potential for Hot Stamper sound. (Skip the British pressings by the way — never heard a good sounding one.)

We cleaned them carefully, then unplugged everything in the house we could, warmed up the system, Talisman’d it, found the right VTA for our Triplanar arm (by ear of course) and proceeded to spend the next hour or so playing copy after copy on side one, after which we repeated the process for side two.

Custard Pie
The Rover
In My Time Of Dying

Houses Of The Holy
Trampled Under Foot
Kashmir

Led Zeppelin returned from a nearly two-year hiatus in 1975 with the double-album Physical Graffiti, their most sprawling and ambitious work. Where Led Zeppelin IV and Houses of the Holy integrated influences on each song, the majority of the tracks on Physical Graffiti are individual stylistic workouts.

The highlights are when Zeppelin incorporate influences and stretch out into new stylistic territory, most notably on the tense, Eastern-influenced “Kashmir.” “Trampled Underfoot,” with John Paul Jones’ galloping keyboard, is their best funk-metal workout, while “Houses of the Holy” is their best attempt at pop, and “Down by the Seaside” is the closest they’ve come to country. Even the heavier blues — the 11-minute “In My Time of Dying,” the tightly wound “Custard Pie,” and the monstrous epic “The Rover” — are louder and more extended and textured than their previous work.

Also, all of the heavy songs are on the first record, leaving the rest of the album to explore more adventurous territory, whether it’s acoustic tracks or grandiose but quiet epics like the affecting “Ten Years Gone.” The second half of Physical Graffiti feels like the group is cleaning the vaults out, issuing every little scrap of music they set to tape in the past few years.

That means that the album is filled with songs that aren’t quite filler, but don’t quite match the peaks of the album, either. Still, even these songs have their merits — “Sick Again” is the meanest, most decadent rocker they ever recorded, and the folky acoustic rock & roll of “Boogie with Stu” and “Black Country Woman” may be tossed off, but they have a relaxed, off-hand charm that Zeppelin never matched. It takes a while to sort out all of the music on the album, but Physical Graffiti captures the whole experience of Led Zeppelin at the top of their game better than any of their other albums.