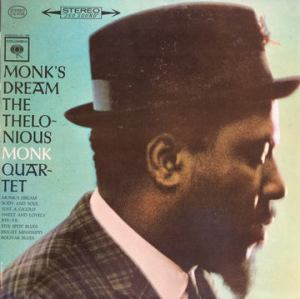 A truly outstanding Monk album from 1963. Thanks to Columbia’s state of the art engineering, the recording really comes to life, or at least it does on a copy that sounds as good as this one does!

Charlie Rouse is particularly wonderful on sax on this album, and this copy features him on many of its tracks. The sax sound is full-bodied and natural with lots of breath and just the right amount of bite. Monk’s piano comes through with powerful dynamics and real weight to the keys.

So many copies just sound like an old jazz record, but this one lets you feel like you are right there in the studio, watching as the music is spontaneously created. What more could you ask for?

What We’re Listening For on Monk’s Dream

Monk’s Dream is the Columbia Records debut release featuring the Thelonious Monk Quartet: Monk (piano), Charlie Rouse (tenor sax), John Ore (bass), and Frankie Dunlop (drums). Jazz scholars and enthusiasts alike also heralded this combo as the best Monk had been involved with for several years. Although he would perform and record supported by various other musicians, the tight — almost telepathic — dimensions that these four shared has rarely been equalled in any genre…

Most notable about Monk’s solo work is how much he retained the same extreme level of intuition throughout the nearly two decades that separate these recordings from his initial renderings in the late ’40s. Monk’s Dream is recommended, with something for every degree of Monk enthusiast.