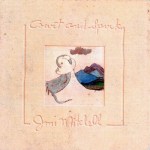 Steve’s version is very musical; it’s rich and natural sounding, which of course makes it very enjoyable. You can do a lot better but you sure can do a lot worse.

Opaque, veiled, lifeless, dull sound is the norm for Court and Spark — most copies are dead as a doornail. If they’re not dead, they’re likely to be thin and gritty.

The DCC is a big improvement over the average domestic pressing. (The original SYL British imports are fairly competitive with the DCC; the later Brits with the K catalog numbers suck as a rule.)

The Nautilus Half-Speed is pretty but lifeless, like so many of their pressings (and Half-Speed Mastered records in general). I would grade it about a C. Don’t waste your money. Keep buying originals until you find a good one.

But Nothing Beats a Hot Stamper, Right?

As we are so fond of pointing out, the real thing just can’t be beat. Now is this a case where a little bump around three thousand cycles is fooling us into believing we are hearing more breath in Joni’s voice, more space around her piano? Is it adding more definition to all the instruments in the wonderfully complex orchestral passage at the heart of Down to You? Is that what it is, a click or two on the old Equalizer?

We’ll let you be the judge. We obviously don’t think so. Our Hot Stamper copies do everything better. The bass is better: tighter, punchier, with more note-like definition. The top end is better: more extended and airier. There’s more weight to the lower mids and upper bass without sounding overly rich or bloated. It can’t all be caused by a 3k bump then, right?

Now that we’ve addressed that silly idea, let’s talk about some of the real issues at play with Court and Spark.

This copy has it all: the kind of transparency that allows you to see into the soundfield like never before; presence and immediacy in Joni’s breathy, emotional vocals; air and ambience around all the instruments; and tubey magical guitars. (Listen especially to the electric guitar on Down To You. That’s the sound we love here at Better Records! Even if your system is all transistor, that guitar will sound like you own the best tube equipment in the world.)

But not tubey mush — the trumpet on Trouble Child has a nice clear tone to it, with its leading edge transients rendered correctly; not the smeary sound of an old Mac, but the clarity of transistors. On the same record!

We Know That Sound — It’s The Master Tape!

What you hear is the sound of the real tape; every instrument has its own character, because the mastering is correct and the vinyl — against all odds — managed to capture all (or almost all; who can know?) of the resolution that the recording had to offer.

It’s awesome. One of the handful of records by Joni that belong in any serious record collection, and an absolute must own for audiophiles.