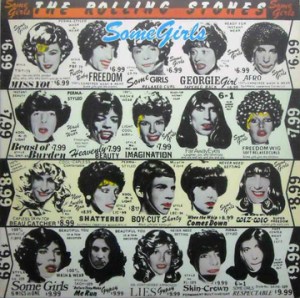 This is the Stones’ last truly great album. All Music Guide gives it the same 5 star rating that they awarded Beggars Banquet, Let It Bleed, and Sticky Fingers. With hits like “Miss You,” “Shattered,” and “Beast Of Burden,” it’s easy to see why.

Most copies are too thin and grainy for serious audiophile listening, but this one is a different story. It’s not easy to find great sound for The Stones, so take this one home for a spin if you want to hear this band bring these songs to life in your very own listening room.

Not many copies have this kind of clarity and transparency, or this kind of big, well-defined bottom end. The sound of the hi-hat is natural and clear on this pressing, as are the vocals, which means that the tonality in the midrange is correct, and what could be more important than a good midrange? It’s where the music is.

One of the keys to getting this album to sound right is fullness. Many copies lack weight to the bottom end, which robs this funky music of its very foundation. Other copies suffer from lean, thin-sounding vocals — do you think that’s the sound Mick Jagger (or engineer Chris Kimsey) was going for?

Some of the qualities we found in short supply on the average copy were warmth, richness, sweetness and ambience — you know, all that Analog Stuff.

The more of these qualities we found on the copies we played, the higher the grade we gave them (all other things being equal of course).

What We’re Listening For On Some Girls

During the mid-’70s, the Rolling Stones remained massively popular, but their records suffered from Jagger’s fascination with celebrity and Keith’s worsening drug habit. By 1978, both punk and disco had swept the group off the front pages, and Some Girls was their fiery response to the younger generation.

Opening with the disco-blues thump of “Miss You,” Some Girls is a tough, focused, and exciting record, full of more hooks and energy than any Stones record since Exile on Main St. Even Their rockers sound harder and nastier than they have in years.

Using “Star Star” as a template, the Stones run through the seedy homosexual imagery of “When the Whip Comes Down,” the bizarre, borderline-misogynistic vitriol of the title track, Keith’s ultimate outlaw anthem, “Before They Make Me Run,” and the decadent closer, “Shattered.”

In between, they deconstruct the Temptations’ “(Just My) Imagination,” unleash the devastatingly snide country parody “Far Away Eyes,” and contribute “Beast of Burden,” one of their very best ballads.

Some Girls may not have the back-street aggression of their ’60s records, or the majestic, drugged-out murk of their early-’70s work, but its brand of glitzy, decadent hard rock still makes it a definitive Stones album.