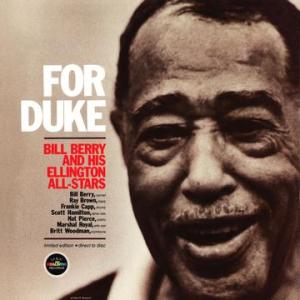 This original M&K Real Time Records pressing has the kind of Tubey Magical Midrange that modern records can barely BEGIN to reproduce. Folks, that sound is gone and it sure isn’t showing signs of coming back. If you love hearing INTO a recording, actually being able to “see” the performers, and feeling as if you are sitting in the studio with the band, this is the record for you. It’s what vintage all analog recordings are known for —this sound.

What We’re Listening For on For Duke

Originally released on LP when it was recorded in 1978, this album features a true all-star lineup. Each artist solos in this heartfelt tribute session. The harmony of “Mood Indigo” serves as a strong reminder of how each member of Duke Ellington’s orchestra was allowed his own say.

Marshal Royal lifts spirits with his bouncing alto attitude. His presence was always “just what the doctor ordered.” Nat Pierce adds his own radiant view of harmonic interpretation. Embellishing alongside Royal on “I Got it Bad,” the pianist creates an aural landscape suitable for framing. Ray Brown and Frank Capp provide a natural rhythmic complement for the session and stretch out a little. Scott Hamilton’s suave tenor voice pervades with a relaxed compassion. He and Bill Berry offer individual interpretations, but firmly within the scope of familiar Ellington territory

All except Hamilton had worked with Duke Ellington; Berry, Woodman and Royal had been members of the famed orchestra. These all-stars understood the music on a personal level. . . it’s one of those rare albums that you can enjoy over and over without losing your smile.