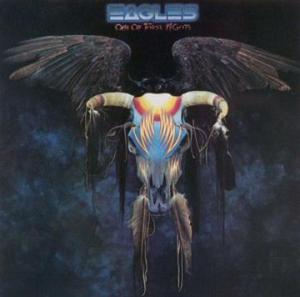 The best copies are richer and sweeter. When you turn them up, they really come to life. When you play the better sides at Rock Music Volumes they really ROCK. When a copy is cut really clean, as the best ones are, the louder you play them the better they sound. They’re tonally correct at loud levels and a bit dull at what we would call “audiophile” levels. That’s the way it should be.

Here is the one comment which really gets to the point of the best pressings: “guitar solos rise above.” The big solo on the title track just soars on this copy like we’ve rarely heard in the past.

This is the guitar sound that Bill Szymczyk achieved with the band that Glyn Johns had not. Of course, Johns had never tried; he saw them as a Country Rock band. The Eagles saw themselves as a Rock band, it’s as simple as that.

Side two in general tends to have worse sound than side one on this album by one half to one full grade, if our experience is any guide. This copy is a good example: side two earned a slightly lower grade than side one.

What We’re Listening For on One Of These Nights

Less grit – smoother and sweeter sound, something that is not easy to come by on One of These Nights.

More bass and tighter bass. This is fundamentally a pure rock record. It needs weight down low to rock the way Bill Szymczyk in this case — wanted it to.

Good top-end extension to reproduce the harmonics of the instruments and details of the recording including the studio ambiance.

The Eagles recorded their albums relatively quickly in their first years of existence, their LPs succeeding each other by less than a year. One of These Nights, their fourth album, was released in June 1975, more than 14 months after its predecessor. Anticipation had been heightened by the belated chart-topping success of the third album’s “The Best of My Love”; taking a little more time, the band generated more original material, and that material was more polished.

More than ever, the Eagles seemed to be a vehicle for Don Henley (six co-writing credits) and Glenn Frey (five), but at the same time, Randy Meisner was more audible than ever, his two lead vocals including one of the album’s three hit singles, “Take It to the Limit,” and Bernie Leadon had two showcases, among them the cosmic-cowboy instrumental “Journey of the Sorcerer” (later used as the theme music for the British television series The Hitchhiker’s Guide to the Galaxy). Nevertheless, it was the team of Henley and Frey that stood out, starting with the title track, a number one single, which had more of an R&B — even a disco — sound than anything the band had attempted previously, and continuing through the ersatz Western swing of “Hollywood Waltz” to “Lyin’ Eyes,” one of Frey’s patented folk-rock shuffles, which became another major hit.

One of These Nights was the culmination of the blend of rock, country, and folk styles the Eagles had been making since their start; there wasn’t much that was new, just the same sorts of things done better than they had been before. In particular, a lyrical stance — knowing and disillusioned, but desperately hopeful — had evolved, and the musical arrangements were tighter and more purposeful. The result was the Eagles’ best-realized and most popular album so far.