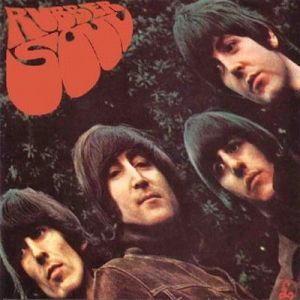 Tubey Magical Acoustic Guitar reproduction is superb on the better copies of this recording. Simply phenomenal amounts of Tubey Magic can be heard on every strum, along with richness, body and harmonic coherency that have all but disappeared from modern recordings, and especially from modern remasterings.

After playing so many copies of this record over the last few years, all of us here at Better Records have come to appreciate just how wonderful an album Rubber Soul really is. It has 14 fairly compact, well-structured, well-arranged pop songs, each of which is a gem in its own right. It reminds me a bit of the second album (With The Beatles) in that respect — short and to the point, get in and get out.

But what we’ve noticed only recently is how much the tambourine is used. It’s all over this album, and the good news is that most of the time it sounds great. There are other high frequency percussion instruments — shakers and the like — and between the tambourine and all the rest, there’s just a lot of percussive energy on most of the songs that really carries them along. To me, this could be called The Tambourine Album. No other Beatles album features that instrument so boldly in the mix and builds so many songs around it.

As you’ve no doubt read on the site more than once, a good LP allows you to appreciate the MUSIC even more than the sound. You feel like you are listening to what The Beatles wanted you to hear, the way they wanted you to hear it. With some minor quibbles, this British pressing sounds like it was made from the real tape, mastered the way The Beatles wanted it to be mastered — and even pressed on pretty darn quiet vinyl.

What We’re Listening For on Rubber Soul

Rubber Soul is one of the most difficult Beatles records to get to sound right. The individual tracks seem to vary drastically in terms of their sound quality. Some (What Goes On) sound sweet, rich and near perfect. Others (You Won’t See Me) can be thin and midrangy. What’s a mother to do?

I think what we’re dealing with here are completely different approaches to the final mix. The Beatles were experimenting with different kinds of sounds, and their experiments produced very different results from track to track on this album more than practically any other I can think of besides The White Album (which as you know was recorded in multiple studios by multiple producers and engineers).

Nowhere Man on side one and Wait on side two are both excellent test tracks. Click on the Track Listing tab above to read more about them both.

A Must Own Beatles Record

Mobile Fidelity made a mess of this song on their Half-Speed Mastered release. They took out far too much upper midrange and top end.

What drives the energy of the song are the cow bell, the drums and other percussion. Instead of a scalpel Mobile Fidelity took a hatchet to this slightly bright track, leaving a dull, lifeless, boring mess. Some Parlophone copies may be a little bright and lack bass, but they still manage to convey the energy of the song. The purple label Capitols can also be quite good. A bit harsher and spittier, yes, but in spite of these shortcomings they communicates the music.

As much as I might like some of the MoFi Beatle records, and even what MoFi did with some of the other tracks on Rubber Soul, they sure sucked the life out of Drive My Car. We all remember how much fun that song was when it would come on the radio. Playing it on a very high quality stereo should make it more fun, not less. If you’ve got a Rubber Soul with a Drive My Car that’s no fun, it’s time to get another one.

Those close-miked guitars can be a bit much unless you have a super-low-distortion copy.

John strums the hell out of his acoustic in the right channel, and on the best copies the sound of the guitar is very dynamic and energetic. No two copies will get that guitar to sound the same, and the more dynamic and lively it sounds, the better in my book.

Did The Beatles ever write a better song?

You Won’t See Me

Can be a bit midrangy in places.

Unless you have an especially good copy this song will sound VERY compressed. It’s much too thick and congealed on the average copy. The best pressings manage to find the richness in the overall sound as well as the breathiness in the vocals that others barely hint at. Play this track on whatever copies you own (more than one I hope) and see if it doesn’t sound as messy as we describe.

The better copies get this one tonally right on the money! That tambourine can be sweet.

This song rocks, with some of the best bass on the album. When the harmony vocals are added for the final chorus The Word takes off into the stratosphere. You won’t find a better Beatles song in their catalog.

Sonic and musical perfection on the best copies! Vocals and guitars should sound present and clear, with Tubey Magic in spades.

Wow, yet another track with superb, rich, full-bodied, smooth sound on the better pressings.

Tonally different from the above track; it should be cleaner but no less sweet.

I’m Looking Through You

If you don’t feel like singing along to this song something must be wrong somewhere. The track’s rhythmic qualities take on a momentum that builds the energy level higher and higher as the song progresses. Above all the sound should be immediate and lively. This is the song that really shows you the passion of The Beatles. Audiophile pressings and CDs don’t do that.

In My Life
Wait

Tons of energy on the drums in the left channel are a key test. In the right channel the shakers and tambourines are way up in the mix. The bass is a bit lean compared to the other tracks and tends to get a bit lost. If you can follow the bass throughout the song that’s a good sign.

Balancing the bass and drums in the left channel with the vocals and percussion in the right channel is not easy to do, which of course is what makes it a great test.

And how is it that none of the critics of “twin track stereo” — the two-track recording approach used on the first two albums, with the elements hard-panned left and right — has ever come clean about the obvious twin track sound of Rubber Soul? We used tracks four, five and six to test side two with, and in all three the vocals are hard panned right with most of the instruments hard-panned left. Why is it wrong for Please Please Me to sound that way — the mono mix being the critic’s choice — but fine for Rubber Soul to be heard that way?

If I Needed Someone

Silky and sweet on the best copies. Harrison’s double tracked vocal is especially well recorded, although somewhat hard to reproduce. VTA and setup in general are critical on this track.

Run for Your Life

Wow — the last song on Rubber Soul, Number 14 for those of you keeping track at home, is surely one of the best sounding.

The Beatles’ sixth album really goes out on a high note, with the band’s most consistent songwriting and production to date, all good reasons that Rolling Stone ranked it Number 5 of the 500 Greatest Albums of All Time.

While the Beatles still largely stuck to love songs on Rubber Soul, the lyrics represented a quantum leap in terms of thoughtfulness, maturity, and complex ambiguities. Musically, too, it was a substantial leap forward, with intricate folk-rock arrangements that reflected the increasing influence of Dylan and the Byrds. The group and George Martin were also beginning to expand the conventional instrumental parameters of the rock group, using a sitar on “Norwegian Wood (This Bird Has Flown),” Greek-like guitar lines on “Michelle” and “Girl,” fuzz bass on “Think for Yourself,” and a piano made to sound like a harpsichord on the instrumental break of “In My Life.”

While John and Paul were beginning to carve separate songwriting identities at this point, the album is full of great tunes, from “Norwegian Wood (This Bird Has Flown)” and “Michelle” to “Girl,” “I’m Looking Through You,” “You Won’t See Me,” “Drive My Car,” and “Nowhere Man” (the last of which was the first Beatle song to move beyond romantic themes entirely). George Harrison was also developing into a fine songwriter with his two contributions, “Think for Yourself” and the Byrds-ish “If I Needed Someone.”