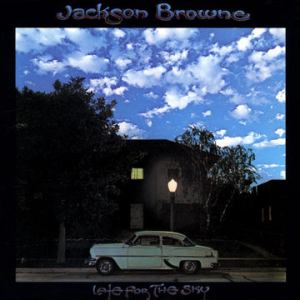 This vintage Asylum LP has the kind of Tubey Magical Midrange that modern pressings cannot BEGIN to reproduce. Folks, that sound is gone and it sure isn’t showing any sign of coming back.

Having done this for so long, we understand and appreciate that rich, full, solid, Tubey Magical sound is key to the presentation of this primarily vocal music. We rate these qualities higher than others we might be listening for (e.g., bass definition, soundstage, depth, etc.). The music is not so much about the details in the recording, but rather in trying to recreate a solid, palpable, real Jackson Browne singing live in your listening room. The best copies have an uncanny way of doing just that.

If you exclusively play modern repressings of older recordings (this one is now 47 years old), I can say without fear of contradiction that you have never heard this kind of sound on vinyl. Old records have it — not often, and certainly not always — but less than one out of 100 new records do, if our experience with the hundreds we’ve played can serve as a guide.

It’s not easy to find copies that get the tonal balance right. Most err in one of two ways — either they’re rich, full and a little dull and veiled, or they’re clear and transparent but leaned-out and boosted.

The clear ones, of course, are the ones that initially fool you — they present an illusion of transparency because everything is easy to hear right from the get-go, but they quickly wear out their welcome with their more “modern,” leaner sound. The choruses are telling here. With so many background singers, the size and weight and energy of the singers only comes through on the copies that are full and rich.

What We’re Listening For on Late for the Sky

The vocals on this track are exceptionally dynamic for a ’70s studio recording. JB gets good and loud on the best copies. The chorus that comes in behind him should also sound big and lively.

Also check out the jug on Walking Slow — you gotta love that sound!

Late for the Sky
Fountain of Sorrow
Farther On

On his third album, Jackson Browne returned to the themes of his debut record (love, loss, identity, apocalypse) and, amazingly, delved even deeper into them.

“For a Dancer,” a meditation on death like the first album’s “Song for Adam,” is a more eloquent eulogy; “Farther On” extends the “moving on” point of “Looking Into You”; “Before the Deluge” is a glimpse beyond the apocalypse evoked on “My Opening Farewell” and the second album’s “For Everyman.”

If Browne had seemed to question everything in his first records, here he even questioned himself. “For me some words come easy, but I know that they don’t mean that much,” he sang on the opening track, “Late for the Sky,” and added in “Farther On,” “I’m not sure what I’m trying to say.” Yet his seeming uncertainty and self-doubt reflected the size and complexity of the problems he was addressing in these songs, and few had ever explored such territory, much less mapped it so well. “The Late Show,” the album’s thematic center, doubted but ultimately affirmed the nature of relationships, while by the end, “After the Deluge,” if “only a few survived,” the human race continued nonetheless.

It was a lot to put into a pop music album, but Browne stretched the limits of what could be found in what he called “the beauty in songs,” just as Bob Dylan had a decade before.

Late for the Sky received mainly favorable reviews. Rolling Stone rated the album 5 of 5 stars also and stated it “strengthens and solidifies Browne’s approach; it’s the quintessential Browne album. The metaphorical complexity of “Fountain of Sorrow” and the clear-eyed poignancy of “For a Dancer” would be a tough act to follow… when his songwriting is sharp, the mellowing trend in his music dulls the impact.”

The original Rolling Stone review in 1974 by music critic Stephen Holden highly praised the album, calling it “…his most mature, conceptually unified work to date.” and called it Browne’s best to date, noting that the “… open-ended poetry achieves power from the nearly religious intensity that accumulates around the central motifs; its fervor is underscored by the sparest and hardest production to be found on any Browne album yet… as well as by his impassioned, oracular singing style.”