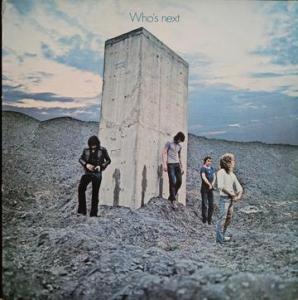 This week we sat down for an all day MASSIVE shootout for Who’s Next, a true Glyn Johns Classic and undeniably one of the greatest rock albums of all time.

The sound of this British Polydor Track Record Original pressing is WONDERFUL from start to finish. There’s no grain to speak of and dramatically less smearing and veiling than most of the copies we played it against. The presence is startling — turn it up good and loud and The Who will be right there thrashing around in your listening room! The bottom end, on both sides, has the kind of weight that’s absolutely essential to this music.

We’re talking BIG ROCK SOUND and quiet vinyl, a rare combination in our experience, our experience of course coming from dozens and dozens of British Tracks and Polydors, German Polydors, Decca originals, MCA reissues, a few imports from other countries (Japan, thin and bright), and last but far from least, The Classic 200 gram pressing. (More about that later.)

The best copies had clarity and transparency that was impossible to beat. It’s a common trade-off with Who’s Next — the copies with the most going on down low often get a little murky in the midrange.

But who are we kidding? Most copies of the album are murky in the midrange, whether they have any low end or not. It’s a murky-sounding recording. Some copies clean up the murk — the Japanese pressings we’ve played come to mind — and that just ruins everything. What you want is the most transparency and clarity in the midrange coupled with the most low-end weight and energy; it’s a simple as that.

The best sides give you exactly that, the best of both worlds — all the whomp, all the clarity, and all the ENERGY. Wait until you hear this pressing. When we say it rocks we ain’t kidding. The louder you play it the better it sounds.

Focusing on the chorus on Behind Blue Eyes really helped us separate the best copies from the near-best. When all the voices are clear and full-bodied, as they are on only the best of the best, it’s amazing how good they sound.

What We’re Listening For on Who’s Next

It’s actually shockingly good, better than it has any right to be coming from the generally awful Classic Records. The bass is PHENOMENAL; no British Track pressing had the bass punch and note-like clarity of the Classic. It shows you the kind of bass you would never suspect is on the tape. It reminds me a bit of the Classic pressing of the first Zep album: in the case of the Zep, the Classic has dynamics that simply are not to be found elsewhere. The Classic Who LP has that kind of bass — it can’t be found elsewhere so don’t bother looking. (Don’t get me wrong; we’ll keep looking, but after thirty plus years of Track Who LPs, we pretty much know when we’re beaten.)

But what the Classic is missing is what the best Tracks and Deccas have in spades: weight and whomp. There’s a POWER to the sound that the Classic can only hint at. The crashing guitar chords that are the hallmark of The Who Sound in general and Who’s Next in particular lack the weight of the real thing; they don’t punch you in the gut the way Townsend no doubt wanted them to. (And Glyn Johns too, one of our favorite engineers of all time). Moons drums don’t blast away like cannons on the Classic. This is The Who’s sound. Everybody who’s ever seen them live knows it. (I saw them back in the day when Moon was still behind his kit and I’ll never forget it.)

Classic did the best they could, but when you hear a copy like this, one that can REALLY ROCK, there’s no going back. Playing the Classic you would never suspect that you’re missing any of the Who Sound, but of course, in the world of records, everything is relative. You’re missing what you don’t know you’re missing.

The other problem with the Classic is that, as good as it is, it has that “I’m A Reissue” sound all through the mids and highs. It can’t hold a candle to the good copies in terms of sweetness, smoothness, spaciousness, richness, presence, life, texture and all the other things we talk about endlessly on our site.

Tubey Magical Acoustic Guitars? Not gonna happen on the Classic. Originals only. Multiply that by every instrument on the album and you have a list of what’s better about the best early pressings.

You Want to Turn The Volume DOWN?

Are You Out of Your Mind?

Now if you want to play this record at 70 db, little of this discussion will make sense. There are some dumb ideas floating out there in Audiophile land, but this has to be one of the dumbest. Anybody who plays a record like Who’s Next at moderate levels should be taken out and hosed down. How do you think Townsend went deaf, by playing his music too softly? He played his music LOUD because that’s the way he wanted you to hear it. Moon beats the hell out of his drums because he likes the sound of drums beaten HARD. If you don’t have the stereo to play this record right, don’t make excuses and DON’T make up bizarre theories about volume levels in the home. You’re not fooling anybody with those kinds of rationalizations. If your speaker distorts, that’s your problem, pal. Don’t lay that trip on me.

Some of us have done our homework and take pride in what we’ve managed to accomplish. We’ve been challenging ourselves and our systems with records like Who’s Next and Aqualung for thirty years. We know how good these records can sound on systems that have what it takes to play them. If you’re not going to turn up the volume, don’t waste your money on a good Hot Stamper pressing. Buy the Classic; at 70 db it will probably sound good enough for you. Spend the money you save on wine and cigars.

Much of Who’s Next derives from Lifehouse, an ambitious sci-fi rock opera Pete Townshend abandoned after suffering a nervous breakdown, caused in part from working on the sequel to Tommy. There’s no discernable theme behind these songs, yet this album is stronger than Tommy, falling just behind Who Sell Out as the finest record the Who ever cut.

Townshend developed an infatuation with synthesizers during the recording of the album, and they’re all over this album, adding texture where needed and amplifying the force, which is already at a fever pitch. Apart from Live at Leeds, the Who have never sounded as LOUD and unhinged as they do here, yet that’s balanced by ballads, both lovely (“The Song Is Over”) and scathing (“Behind Blue Eyes”). That’s the key to Who’s Next — there’s anger and sorrow, humor and regret, passion and tumult, all wrapped up in a blistering package where the rage is as affecting as the heartbreak.

This is a retreat from the ’60s, as Townshend declares the “Song Is Over,” scorns the teenage wasteland, and bitterly declares that we “Won’t Get Fooled Again.” For all the sorrow and heartbreak that runs beneath the surface, this is an invigorating record, not just because Keith Moon runs rampant or because Roger Daltrey has never sung better or because John Entwistle spins out manic basslines that are as captivating as his “My Wife” is funny. This is invigorating because it has all of that, plus Townshend laying his soul bare in ways that are funny, painful, and utterly life-affirming. That is what the Who was about, not the rock operas, and that’s why Who’s Next is truer than Tommy or the abandoned Lifehouse. Those were art — this, even with its pretensions, is rock & roll.