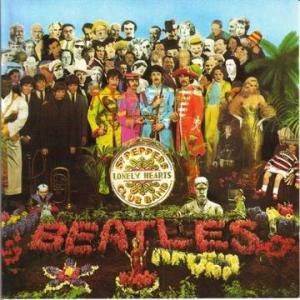 The sound here is so big and rich, so clear and transparent, that we would be very surprised, shocked even, if you’ve ever imagined that Sgt. Pepper could sound this powerful and REAL.

This vintage-but-far-from-original British pressing has the kind of Tubey Magical Midrange that modern records rarely even BEGIN to reproduce. Folks, that sound is gone and it sure isn’t showing signs of coming back. If you love hearing INTO a recording, actually being able to “see” the performers, and feeling as if you are sitting in the studio with the band, this is the record for you. It’s what vintage all analog recordings are known for — this sound.

What the Best Sides of Sgt. Pepper’s Lonely… Have to Offer Is Not Hard to Hear

The best copies of Pepper manage to combine Tubey Magical richness and fullness with transparency and clarity.

If you have multiple copies to compare, next on the list would be bottom end weight, top end extension, and of course the overall energy of the copy being played. You will have a very hard time finding two copies of Pepper that sound alike in all these areas.

For Big Production Rock Albums such as this there are some obvious problem areas that are often heard on at least one or two sides of practically any copy of this album.

With so many heavily-produced instruments crammed into the soundfield, if the overall sound is at all veiled, recessed or smeared — problems common to 90+% of the records we play in our shootouts — the mix quickly becomes opaque, forcing the listener to work too hard to separate out the elements of interest. Exhaustion, especially for those who are listening intently, soon follows.

Transparency, Clarity and Presence are Key

What We’re Listening For on Sgt. Pepper

The Greatest Rock Record Ever Made?

A more original group of songs simply could not be found in 1967 (the world would have to wait until the White Album came out for an even more original batch), practically every one of which is brilliant and unique. I never fully appreciated this album back in the day, but repeated listenings has shown me the error of my ways. There’s a reason it regularly gets voted the greatest rock album of all time.

Sgt. Pepper’s Lonely Hearts Club Band
With a Little Help from My Friends
Lucy in the Sky With Diamonds
Getting Better
Fixing a Hole
She’s Leaving Home
Being for the Benefit of Mr. Kite

Within You, Without You
When I’m Sixty-Four
Lovely Rita
Good Morning, Good Morning
Sgt. Pepper’s Lonely Hearts Club Band
A Day in the Life

With Revolver, the Beatles made the Great Leap Forward, reaching a previously unheard-of level of sophistication and fearless experimentation. Sgt. Pepper, in many ways, refines that breakthrough, as the Beatles consciously synthesized such disparate influences as psychedelia, art-song, classical music, rock & roll, and music hall, often in the course of one song. Not once does the diversity seem forced — the genius of the record is how the vaudevillian ‘When I’m 64’ seems like a logical extension of ‘Within You Without You’ and how it provides a gateway to the chiming guitars of ‘Lovely Rita.’ It’s possible to argue that there are better Beatles albums, yet no album is as historically important as this.