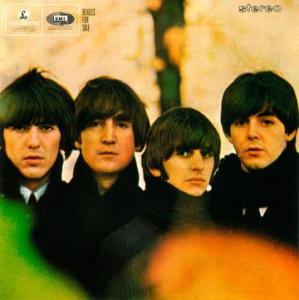 When comparing pressings of this record, the copies that get their voices to sound present, while at the same time warm, smooth, and sweet, especially during the harmonies and in the loudest choruses, are always the best. All the other instruments seem to fall in line when the vocals are correct. This is an old truism — it’s all about the midrange — but in the case of an early Beatles album such as For Sale, it really is true.

We had a lot of fun reading The Complete Beatles Recording Sessions, which details the band’s studio history from 1962 – 1970. In the book, George Martin mentions that he felt this album was a rush job and that he has trouble listening to it to this day. As much respect as we have for Sir George, we couldn’t disagree more. For Sale is WONDERFUL!

The more we got to know the album the more we enjoyed it. Repeated listenings only enhanced our enjoyment, and a good copy like this let us hear things in the music that we hadn’t heard before. This isn’t the kind of record that beats you over the head with mega pop hits sure to enthrall screaming teens.

With wonderful songs like I’ll Follow The Sun, Eight Days A Week, I Don’t Want To Spoil The Party and What You’re Doing, For Sale gives you a more complete picture of the heartfelt side of the Beatles. More often than not the vibe is innocent, sweet, and delicate.

What We’re Listening For on Beatles For Sale

Of all the Beatles records that we play around here, this, along with Abbey Road, Rubber Soul, and Please Please Me, is one of our most enjoyable regular shootouts. The music is so good, yet this group of songs hasn’t been overplayed to death. In our book, it’s a minor classic.

You might even call it the Beatles’ undiscovered album.

Everyone knows The White Album and Sgt. Pepper’s like the back of their hands, but what about Beatles For Sale? If more people had Hot Stamper pressings of this LP we guarantee you’d be hearing a lot more about the album. When the sound is this good, For Sale is (Tubey) MAGICAL.

Tubey Magical Acoustic Guitar reproduction is superb on the better copies of this recording. Simply phenomenal amounts of Tubey Magic can be heard on every strum, along with richness, body, and harmonic coherency that have all but disappeared from modern recordings (and especially from modern remasterings).

Those of you looking for quiet vinyl will have to settle for the sound of later pressings and Heavy Vinyl reissues, purchased elsewhere of course as we have no interest in selling records that don’t have the vintage analog magic of these wonderful pressings.

The Tracklist below has a select song breakdown for each side, with plenty of What to Listen For advice. Other records with track breakdowns can be found here.

No Reply
I’m a Loser
Baby’s in Black

This song tends to be a bit dull on most pressings of the album, but on a superb copy you’ll get wonderful Tubey Magic, warmth and life.

It seems to us that I’ll Follow the Sun would have to be on any list of The Beatles’ very best. On a good copy the vocals are sweet and delicate beyond belief.

Paul pops the mic on one word in this song — if your system has reasonable resolution and bottom end speed, you should be able to pick it out. Drop us a line if you can tell us what word it is — we’re curious to know if you heard what we heard.

A tough track to get right. There are some lively, jangly guitars behind the smooth voices. Many copies seem to sacrifice one for the other, leaving you with either irritating guitars or dull voices. The best copies are the ones that get them both right.

The transient information on this song is often just a bit smeared. On the more transparent copies you’ll be able to hear each time the piano’s hammer hits the strings. Listen for the space between the notes when the piano is playing briskly.

This track is also a good test for how punchy the bottom is. With that big drum in the intro it won’t take long for you to figure out if your copy has much deep low end.

Everybody’s Trying to Be My Baby

There are some important changes on Beatles for Sale, most notably Lennon’s discovery of Bob Dylan and folk-rock. The opening three songs, along with “I Don’t Want to Spoil the Party,” are implicitly confessional and all quite bleak, which is a new development… Its best moments find them moving from Merseybeat to the sophisticated pop/rock they developed in mid-career