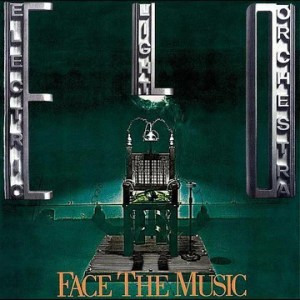 Nobody seems to have noticed — at least I can find no evidence for anyone noticing, using a google search — that the song Fire on High, which opens side one of this album, is directly lifted from the opening song on Goodbye Yellow Brick Road, Funeral for a Friend.

He owes a lot of his sound to The Bee Gees as well as The Beatles, another thing about his music that nobody seems to notice.

But that takes nothing away from the fact that he is a consummate craftsman of catchy pop songs, the kind that get stuck in your head and make your day brighter than it would otherwise have been.

There are many fine examples of these kinds of songs on this very album. The first three (out of four) tracks on side one are all very strong: Fire On High, Waterfall and Evil Woman. On side two all the songs after Poker are very strong: Strange Magic, Down Home Town, and One Summer Dream.

That makes this a fairly consistent ELO record. Not quite the equal of A New World Record but not that far behind it either.

What We’re Listening For on Face the Music

All the copies we played in our shootout were mastered at The Mastering Lab, some pressed here in the states and some pressed across the pond. We could detect no consistent difference between the imports and domestics; both were a mixed bag, no surprise there. (Eldorado is the same way we’ve found. Wish we could find a killer copy to offer our ELO fans but such a record has eluded us to date.)

For Face the Music they’re pretty much the ones we look for on any good rock album: energy, clarity, presence, whomp factor, dynamics, etc., with one important quality moving higher up the list than would normally be the case: texture. If the strings are smeary and too smooth, lacking texture and harmonics, most of what’s fun about this music goes right out the window.

As long as the sound is RICH and TUBEY. That is Jeff Lynne’s signature sound. The copies that don’t have the kind of rich, smooth, classically British sound — think Moody Blues — may be clear and energetic, but at a deeper, more fundamental level they sound weird and just plain wrong.

Igor Stravinsky said to an author of his Three Songs by William Shakespeare, in which he epitomized his discovery of Webern’s music: “A good composer does not imitate; he steals.”

Electric Light Orchestra’s more modest follow-up to Eldorado is a very solid album, if not as bold or unified. It was also their first recorded at Musicland in Munich, which became Jeff Lynne’s preferred venue for cutting records.

At the time, he was also generating songs at a breakneck pace and had perfected the majestic, quasi-Beatles-type style (sort of high-wattage Magical Mystery Tour) introduced two albums earlier. The sound is stripped down a bit on Face the Music, Louis Clark’s orchestral contributions generally more subdued than on Eldorado, even when they compete with the band, as on “Strange Magic.”

The soulful “Evil Woman” was one of the most respectable chart hits of its era, and one of the best songs that Lynne ever wrote (reportedly in 30 minutes), while “Strange Magic” showed off his writing in a more ethereal vein. “One Summer Dream,” which is written in a similar mode, also has a touchingly wistful mood about it but is a somewhat lackluster finale compared to the albums that preceded and followed this one.

The requisite rock & roll number, “Poker,” is a quicker tempo than anything previously heard from the band, the guitar is pumped up louder than ever. And “Down Home Town,” an experiment in achieving a country & western sound, is fresh at this point and more interesting than the equivalent material of Out of the Blue.