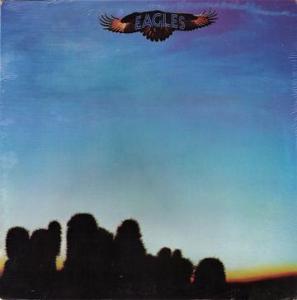 What We’re Listening For on Eagles

At one time this was my single favorite Demo Disc. A customer who bought one of these one time told me it was the best-sounding record he had ever heard in his life. I don’t doubt it for a minute. It’s certainly as good as any rock record I have ever heard, and I’ve heard some awfully good ones.

Click on The Real Master Tape tab above to read the rest of our story.

On most copies the vocals in the chorus will be a little bit strained. When you hear the vocals sound completely free from harmonic distortion or “edge” of any kind, you have yourself an exceptionally well mastered and pressed copy.

Balance is the key element of the Eagles’ self-titled debut album, a collection that contains elements of rock & roll, folk, and country, overlaid by vocal harmonies alternately suggestive of doo wop, the Beach Boys, and the Everly Brothers. If the group kicks up its heels on rockers like “Chug All Night,” “Nightingale,” and “Tryin’,” it is equally convincing on ballads like “Most of Us Are Sad” and “Train Leaves Here This Morning.”