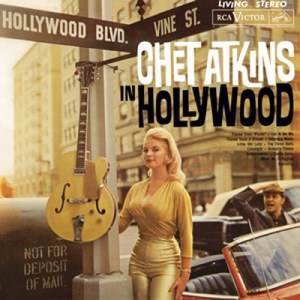 DEMO DISC SOUND! Fairly quiet and unusually clean for a record of its age. TAS List of course, and full of Living Stereo Magic. You can feel the cool air of the studio the minute the needle hits the groove!

I suppose we owe a debt of gratitude to Harry Pearson for pointing out to us with his TAS List what a great record this is, although I’m pretty sure anybody playing this album would have no trouble telling after a minute or two that this copy is very special indeed.

But I would bet a very large amount of money that the pressing that Harry liked and recommended on his list is the inferior original recording, the one with the guitar superimposed over the cityscape.

Leave it to us, the guys who actually play lots of records and listen to them critically, to recognize how much better the 1961 version is compared to the original from 1959.

What We’re Listening For On Chet Atkins In Hollywood

Think about it: if you had only seven copies, you might not have ever gotten to hear a copy that sounded that open and clear. And how many even dedicated audiophiles would have more than one or two clean vintage copies with which to do a shootout? These records are expensive and hard to come by in good shape. Believe us, we know whereof we speak.

One further point needs to be made: most of the time these very special pressings are just plain more involving. When you hear a copy do what this copy can, it’s an entirely different — and dare I say unforgettable — listening experience.

If the cover of At Home evokes the 1950s, the music on In Hollywood IS the 1950s: a warm, cozy, sophisticated album of mood music in the best sense. Yet this is not an album of film music (though a handful of film themes turn up). Rather, it is exactly what the title indicates: Chet Atkins recording an album in a Hollywood studio, as opposed to the familiar haunts of Nashville. Here, he places his often affectingly lovely guitar licks in front of full, lush, sometimes inspired string arrangements by Dennis Farnon. Sometimes, Atkins appears all by himself, caressing “Estrellita” before the strings kick in, and his fingerpicking technique appears on a piquant treatment of “Armen’s Theme” (originally a pre-Chipmunks hit for Ross Bagdasarian aka David Seville). Farnon is particularly good when he hooks onto a lush string motif and repeats it seductively on the “Theme From Picnic” or follows Atkins’s guitar in a broad, surpassingly lovely treatment of Fats Waller’s “Jitterbug Waltz” — the two most gorgeous tracks on the record. For some, this record might fall under the category of guilty pleasures, but a pleasure it is, one of the great make-out records of its time.